‘Manny’ in US theaters and On Demand Jan 23 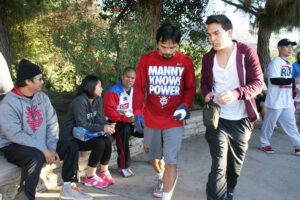 Narrated by Academy Award Nominee Liam Neeson and directed by Ryan Moore and Academy Award winner, Leon Gast (When We Were Kings), “Manny” – a feature length documentary film about the “People’s Champ,” will be released in theaters and On Demand starting Jan. 23, 2015.  Highlighting Pacquiao’s journey from a struggling and starving teenager who engaged in the world of boxing to provide for his family, to becoming the world-renowned boxing icon that he is today, the film takes its viewers behind the scenes into the life of Manny Pacquiao.

Producer and Director, Ryan Moore said that he has always wanted to capture something real on camera. And with 5 years in the making of “Manny”, he was able to obtain footages that show the different facets of Manny Pacquiao’s life. In fact, the film even includes never-before-seen home footages.

Ryan Moore, who is Filipino-American, hopes that after watching his film, Filipinos will be reminded of their roots, as Pacquiao’s life is depicted not only in the aspect of being a fighter in the ring, but in essence, it’s more about him being a true fighter in life. “My purpose is to give the opportunity for people to see the very important moments of his life. We all know what happens in his fights, but it’s the stories in between that really shaped his character and made him unique as a fighter. “ said Moore.

Moore also aspires to provide a medium for Filipino stories to be heard globally. And with the release of this film, he hopes that even non-Filipinos will take pleasure in learning about Manny Pacqiuao’s life and even be inspired by him.

Bigger than boxing, Manny Pacquiao’s role now transcends from sports to politics, to his role as a public figure. The Filipino rely on him in ways beyond what is expected of an athlete.  Pacquiao fights not only for himself or for his family, but for the Filipino people as a whole.