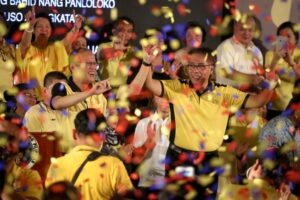 President Aquino raises the hand of DILG Secretary Mar Roxas to the shower of confetti after Aquino endorsed Roxas for the presidential race at the Club Filipino in Greenhills on Friday. Aquino cited Roxas’ record and pointed to him as the best bet to continue the “Daang Matuwid” (Straight Path). (MNS photo)

MANILA (Mabuhay) — Interior Secretary Mar Roxas on Monday morning confirmed that he has formally asked Sen. Grace Poe to be his running mate in the 2016 national elections.

He said the meeting lasted for a few hours and Poe was accompanied by her husband, Neil Llamanzares.

Poe, meanwhile, has yet to confirm the meeting. Her staff said the senator will be available for interview before the start of session in the afternoon.

Poe has repeatedly declined to confirm if she is running for president with Sen. Francis Escudero as her running mate. (MNS)

Scrapping COVID-19 mask rule possible, but should not be soon — expert