Mar: I asked Grace to be my VP 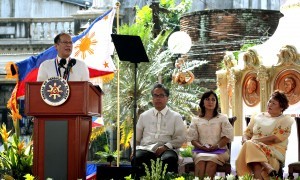 It was the first time that Roxas clarified the issue on national television.

Roxas clarified that he had asked Poe to be his running mate even before he was endorsed by President Benigno Aquino III last July 31 at the historic Club Filipino.

He said Poe could have been thinking that the offer was not formal because he was not yet endorsed by Aquino at the time.

Last May, Poe herself said that Roxas offered her to be his running mate during a chance meeting at a restaurant.

Roxas said he made his offer to Poe months ago and it was reiterated by President Aquino to the senator during one of their meetings.

The Interior secretary said that he will again communicate with Poe to formalize his offer.

Asked to comment on Roxas’ statement, Poe said she was still waiting for the Interior secretary to call her.

“I also heard about this invitation to meet today thru media. He himself has not called me,” Poe said.

Poe added that she is “always open to meet but no arranged meeting yet.”

Earlier, Poe said that she had not been formally asked by the Liberal Party to run for vice president in 2016 under its ticket.

But even as Poe has yet to categorically state her political plans for 2016, Nationalist People’s Coalition acting president and House Deputy Majority Leader Giorgidi Aggabao said Poe has already made up her mind to run for president in 2016 in tandem with Sen. Francis Escudero.

Aggabao claimed the two senators will announce their candidacies in September.

He said if the two senators announce their candidacy, they will offer the “entire party apparatus of the NPC for their candidacies.”(MNS)

Power supply outlook tight but there’s nothing to worry about, says DOE