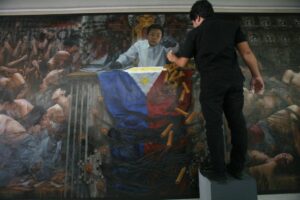 Speaking to reporters, Mrs. Marcos said her son Bongbong has what it takes to lead the country, having been exposed to politics at a very young age.

“I want him to be able to serve the country and benefit the country. I think he has the potential there and after all he was 21 years in Malacanang and he saw how his father and mother were dedicated to the Philippines and to the Filipino people, and that was the best time that we had in our history,” she said.

Mrs. Marcos was at the Commission on Elections (Comelec) main office Tuesday to accompany Leyte Rep. Martin Romualdez, who filed his certificate of candidacy for senator.

Asked whether she wants for her son to run for president in the 2022 polls, Mrs. Marcos said the presidency “belongs to destiny and God.”

Mrs. Marcos said her son is a leader with vast experience, citing the latter’s Oxford education and years in government.

“Ilocos is the only province in the Philippines that has windmill power – one hundred percent. Despite the fact the budget was small, he was able to afford this,” she said.

Asked about the decision of Davao City Mayor Rodrigo Duterte not to run for president, she said: “I think it is better that way. For me, I just pray that everything comes out well.”

Sen. Marcos was eyeing Duterte to become his running mate.

The Marcos family has been roundly criticized by anti-martial law activists for failing to show any remorse for the atrocities committed during the time of the late dictator.

In an earlier interview, Sen. Marcos boasted of the contributions of his father to the Philippines.

Nonetheless, the son and only namesake of the late dictator said he and his family feel sorry for the people who felt injustice during his father’s time.

“We have constantly said that during that time of my father, mayroong mga nasagasaan or mayroong sinasabing hindi natulungan or were victimized in some way or another, of course we’re sorry that that happened. These are instances that they have fallen through the cracks,” he said.

Critics to PNoy: Why pin blame solely on Napeñas?