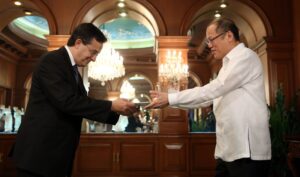 President Benigno S. Aquino III accepts the credentials of French Republic Ambassador to the Philippines Thierry Mathou during the presentation of credentials at the Music Room of the Malacañan Palace on Thursday (November 05).
(MNS photo)

“How can you possibly defend somebody who has allowed this kind of victimization of our overseas Filipino workers to carry on? In the face of public scrutiny, exposure, scandal and clear violations of trust and the law, pinagtatanggol pa rin (he is still being defended)?” Marcos said at the Kapihan sa Senado forum on Thursday.

He also called for the immediate dismissal of Honrado from the position as he should not have been tapped to manage the airports because of his lack of knowledge in the field.

“He should be fired immediately. He’s clearly incompetent. He should’ve never been in the job in the first place,” said Marcos.

The scam, which was allegedly pulled off by a syndicate composed of airport officers and porters, victimizes airline passengers, particularly OFWs and senior citizens, by planting bullets in their luggage and then demanding money from them in exchange for their release.

The bullet-planting incidents in the airports, according to Marcos, only reflect Honrado’s lack of experience for the job.

(It is apparent that he does not know how to perform the job because he allows this to happen.)

The senator, who will run as vice president in the next year’s elections with Senator Miriam Defensor-Santiago, also hit the administration’s flimsy stance on the controversial issue.

He said the administration defending the MIAA and its concerned officers just encourages unscrupulous individuals behind the scam to go on with their “racket.”

“The [administration] is saying the problem is that the OFWs are not securing their bags. But the problem is not in the OFW but in the organization that allows the tanim-bala to carry on even when it is reported in the press. This just breeds impunity,” he said.

Marcos added that appointing officials in the government should not be based on political favor or one’s obligation to return a favor owed to someone.

“If you are going to appoint someone in a certain position, you should be confident that he or she can get the job done. Not because of political favor, not because he is your friend, and not because of utang na loob (debt of gratitude),” he said.

(Pay your debt of gratitude in another way, then. Don’t do so at our countrymen’s expense.)(MNS)

Ban on motorcycle transport of children along highways sought 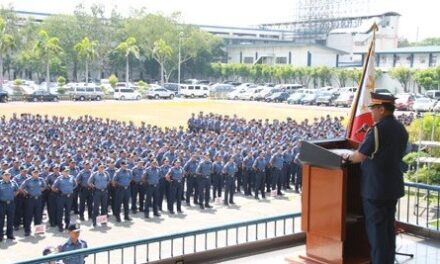