Marian-Coco film to be released in early 2013 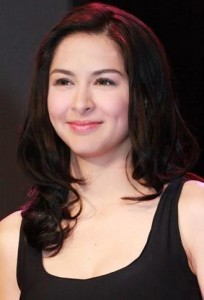 The film production company behind the cross-network team-up of Coco Martin and Marian Rivera has revealed the film’s title and its release window.

Now officially titled “Maybe This Time,” the big screen “love team” of the prized primetime stars of ABS-CBN and GMA-7 is set for a release in the first quarter of 2013, according to Regal Films in a post on its official account on micro-blogging site Twitter on Wednesday.

First announced in March this year, “Maybe This Time, which will be directed by Maryo J. de los Reyes, has generated buzz among fans of Martin and Rivera, as the two have faced off a number of times as the lead stars of their respective primetimes series.

Martin currently topbills ABS-CBN’s top-rating soap “Walang Hanggan,” which is down to its last couple of weeks on primetime. Rivera, meanwhile, is set to headline another soap later this year.

Joining the two in “Maybe This Time” is veteran actress Snooky Serna, who earlier expressed confidence that the competing network talents will have a smooth working relationship.

“Maybe This Time” is not the only Regal Films project that seeks to unite talents from the top three TV networks in the country.

The local film production company is also behind Adolfo Alix’s “Ride to Love,” which features an ensemble cast of Kapamilya, Kapuso and Kapatid stars; and the romance-drama film “The Bride and the Lover,” which brings together Paulo Avelino, Jennylyn Mercado, Lovi Poe and Hayden Kho.  (MNS)

John Estrada on opportunity and loyalty