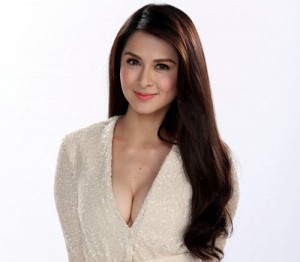 Marian Rivera refused to comment about the recent revelation of Karylle that she had been “two-timed” by an unidentified ex-boyfriend.

Before her current husband Yael Yuzon, Karylle’s last known relationship was with actor Dingdong Dantes, who is now married to Rivera.

Rivera said she does not want to comment on the matter since Dantes’ name was never even mentioned by Karylle.

It was Vice Ganda brought up the topic on “It’s Showtime” last Friday. During his eponymous love advice segment, “AdVice Ganda,” an audience member shared that her boyfriend of three months has another girlfriend of six years.

The comedian then enlisted the help of Karylle and another co-host, Anne Curtis, to give their advice to Danielle Leonardo. He asked Karylle if she ever had a similar experience.

The question prompted cheers from the audience. Karylle tried to change the topic, but when pressed to answer, said, “Nangyari!”

When asked when it happened, Karylle said she no longer remembers. She also diverted the conversation when Vice Ganda asked her directly who cheated on her. (MNS)

Karylle, Yael to wed next month