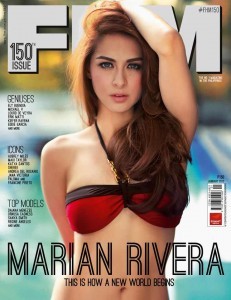 After gracing the cover of FHM Philippines, Marian Rivera is on a roll as she now appears on the cover of the men’s magazine in Thailand.

In a post in her official Instagram account on Wednesday, Rivera seemed surprised when she learned that she is the cover girl of FHM Thailand’s January 2014 issue.

The cover photo was the same one used in the January 2013 issue of FHM Philippines, which was taken by ace lensman Mark Nicdao, with the actress wearing a red and black bikini top, and her long brown hair swept to one side.

Rivera, who rose to fame for her role as Marimar in the remake of the hit Mexican soap of the same title, was named as FHM magazine’s “Sexiest Woman in the Philippines” for 2013.