New York Jets quarterback Mark Sanchez is 24 years old and has already won four road playoff games in his career. But he was no match for a 17-year-old ingenue whom he met in a New York City nightclub.

Now that Deadspin and the New York Post have tag-teamed this story, we know that Sanchez and the17-year-old high school girl had a sexual relationship of sorts. Somewhere the writers for “Gossip Girl” are kicking themselves for not exploring this storyline, pro quarterback dates popular high schooler. (And you thought hooking up in high school was tough when you only had to compete with high school quarterbacks). 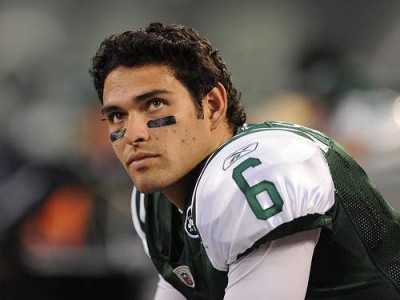 Sanchez is already coming in for a degree of criticism that I don’t remember existing for Jerry Seinfeld or Kobe Bryant, two other grown men who dipped down and dated 17-year-olds. The Seinfeld story is even more absurd. He was picking up his girlfriend, Shoshanna Lonstein, at her high school when he was 40.

What I want to focus on is this: the girl in this case is no victim and Sanchez didn’t do anything wrong. Reflexively, that’s the response, blame the older man, in this case the quarterback. That isn’t fair in this case.

Consider what we know, first the 17-year old finagled her way into a New York city club that was for ages 21 and up. Second, when she met Sanchez at this club and gave him her number according to Deadspin she actually referenced her age: “You know I’m 17, right?” she remembers saying. “Well, we can still talk, but I can’t see you until you’re 18,” Sanchez said. “Actually,” E.K. (Deadspin chose not to picture or name the girl in question, but the New York Post had no such qualms) replied, “17 is legal in New York.”

Third, she contacted Deadspin to help get the publicity ball rolling on this story. Yep, she knew how to work the levers of the Internet sports marketplace better than most pro athletes. Fourth, she took photos from inside Mark Sanchez’s house so she’d have evidence of their tryst.

Hell, this girl should be hired by TMZ tomorrow. She’s already got their style of reporting down.

She was also correct, 17 is the age of consent in New York state. Yep, she’d done her research, already! And if she was out in a 21-and-up club, she was trying to meet grown men, not high school boys. That was, in fact, the goal.

If she’d wanted to date a pimply faced boy her own age she could have met him in A.P. History. What’s more, when Sanchez took the safe road and said he couldn’t see her until she was 18, she informed him that 17 was, in fact, legal and that set their relationship in motion.

Hopefully, for his sake, Sanchez actually looked up the age of consent laws in New York instead of relying on a teenager in a club. In fact, if he’s going to pursue teenage girls, as frequently as the bi-coastal quarterback travels, he might as well carry a pocket guide to age of consent laws in his wallet. Or keep the Wikipedia page open on his iPhone at all times.

Because now it’s time for a legal digression, age of consent laws are one of a small minority of laws where mistake of fact is no defense. That is, just because someone lies to you about their age and you listen to them or rely upon where you met them – a 21-and-up club, for instance – that’s no defense to your crime. Violating the age of consent law is a strict liability offense.

In law school a classmate pegged his final year thesis to arguing that mistake of fact defenses should be permissible in age of consent cases. We joked then that if he ever ran for political office this thesis was going to be used against him on the campaign trail. Menacing voice in a television advertisement featuring an unshaved man lurking in the shadows: “Governor? (Insert name here) thinks 48-year-old predators should be able to sleep with your teenage daughter!”

The nation’s interest and fear of young women and older men is the premise behind approximately 75 percent of all “CSI” shows. Indeed, one of the most popular, and mocked shows, on television was called “To Catch a Predator.” The conceit was simple, grown men are busted trying to have sex with teenagers that they met in online chat rooms. When the men arrived at the home, host Chris Hansen was there to confront them. But the show became so popular that it was hard to find victims who didn’t recognize the host. Think about this for a moment: the show was so popular with actual predators that the surprise didn’t work anymore.

What isn’t funny is the danger of a strict liability law’s impact on unintentional violators. While I was practicing law in the United States Virgin Islands, a bartender was sentenced to 10 years in prison for consensual sex with a 17-year-old who had spent the night partying in a bar with a fake I.D.

As you can see, it’s quite the hodgepodge of ages and regulations across our country. Indeed, lawyers are often accused of forum shopping to find the most advantageous location to file their lawsuits. Well, you can make a case that teenagers today can sex shop, that is find a lenient state where their action is legal and get to it.

While Sanchez’s fling will ripple through the Internet and across the pages of tabloids for the next few weeks to come, his case offers an intriguing series of propositions that have nothing to do with titillation: why isn’t there a national age of consent in our country and why is it that lying about your age isn’t admissible as a defense? Also, as in this case, are young women becoming so much more savvy about their own sexuality that we’re protecting some who are gaming the system?

Ultimately, there may well have been a predator in the case of the pro quarterback and his high school paramour.

The shocking part? The predator may well have been the teenage girl.