Marlou being interviewed at the Oscars’ Red Carpet

Super stylist Marlou Colina is still reveling in the glow of his Oscars weekend, working and rubbing elbows with the stars at the recent Academy Awards in Hollywood.

The boyish owner of Colina Salons was busy for two days working with The Weinstein Company, a number of whose projects were in the running: August Osage County,  whose co-star Julia Roberts was nominated for Best Supporting Actress; The Grandmaster, which was nominated for Best in Costume Design; Philomena, nominated for Best Motion Picture and Best Adapted Screenplay, and its lead, Dame Judi Dench, for Best Actress. Though she did not win, Dench was praised by the winner, Cate Blanchett, in her acceptance speech.

Marlou is exclusively working for Harvey Weinstein’s family for the pre-Oscars night and the awards night itself, doing the hair and make-up for Harvey’s daughter.

“I didn’t get enough sleep since I had to be at the Red Carpet for the ‘KTLA Live at the Red Carpet’ doing the hair and make-up for the models of Hollywood couturier Alexis Monsanto, and KTLA reporter Erin Myers,” Marlou said.

“But no complains,” he adds happily.  “It’s God’s will that I am here. It’s a once-in-a-lifetime opportunity, my American Dream come true.”

While working, Colina himself got some pleasant surprised: he was interviewed by TV reporters and Web bloggers on the red carpet, and asked for his insights regarding fashion trends at the red carpet over the years.

It’s perhaps a recognition of how far Marlou, this humble but talented stylist, salon owner and beauty resource speaker, has come in his journey of making people beautiful, stars or not.

This Sunday, March 9, Marlou will sit as one of the judges at the “Los Angeles Ballroom Dancing Show” at the La Mirada Theater for the Performing Arts.

Filipino Actor, Raymond Bagatsing, to be honored at OneFilAm Festival 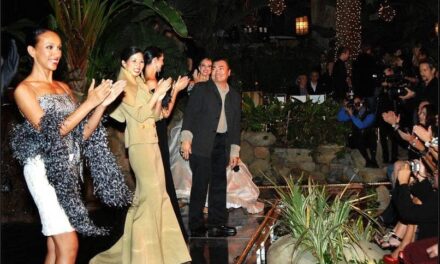 Fall makeup: Yves Saint Laurent gives us a metal-rock aura from our head to our fingertips