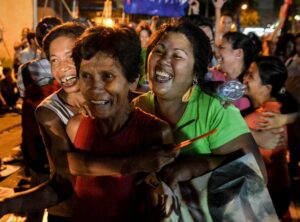 Activists react after it was announced that the execution was delayed for death row prisoner Mary Jane Veloso, during a vigil outside Indonesian embassy in Makati, Philippines April 29, 2015. The execution of a Filipina drug convict by an Indonesian firing squad was delayed at the last minute after one of her recruiters surrendered to police in the Philippines, the attorney general’s spokesman said on Wednesday.(MNS photo)

MANILA (Mabuhay) — Filipina migrant worker Mary Jane Veloso has been taken away from the execution island in Indonesia after being granted reprieve by the Indonesian government, The Department of Foreign Affairs said Wednesday.

The 30-year-old Veloso was spared from execution by a firing squad early Wednesday, after President Benigno Aquino III made a last-minute appeal to the Indonesian government to turn the Filipina convicted on drug charges into a witness.

Indonesian and Philippine officials struggled to deal with the emotion-laden situation up to the final hours, prompting Aquino to take up the matter to Widodo at sidelines of a Southeast Asian summit where they took up much bigger regional concerns like the South China Sea territorial disputes.

“The President has undertaken all avenues including diplomatic and legal means to do what he can for Mary Jane as it is the President’s belief that every human life is invaluable,” Foreign Affairs Secretary Albert del Rosario told journalists at a hastily called press conference before noon Wednesday.

“The last minute in stay had been granted and as we conveyed this morning, we are all relieved by this welcome development,” he said.

Del Rosario said the purpose of the stay is “to allow Veloso to give testimony in connection with the complaint filed against the recruiters.”

Veloso’s recruiter, Maria Kristina Sergio, turned herself in to Philippine authorities on the day of her execution. Sergio, said to be the one who tricked Veloso into bringing the suitcase loaded with 2.6 kilograms of heroin to Indonesia, is expected to face charges of illegal recruitment, human trafficking and estafa.

Earlier, a report from The Jakarta Post, quoting Indonesian news agency Antara, said Veloso was brought back to her cell at Wirogunan Penitentiary in Yogyakarta on board a green car.

Veloso was reportedly escorted by the Mobile Brigade, a special operation force unit of the Indonesian police, during her transfer from Nusakambangan Island to Yogyakarta.

In April 2010, Veloso was arrested in April 2010 at the Yogyakarta Airport. She was then convicted for possessing 2.6 kilograms of heroin in her luggage. She denied being a drug courier, saying she was tricked into bringing the luggage to Indonesia by a Filipino friend who is also her recruiter.

Defying appeals from foreign governments, Indonesia, after the stroke of midnight, executed on Wednesday all eight prisoners – two Australians, one Brazilian, four Nigerians and one Indonesian – except Veloso.

“We will find out how long it will be,” he said, but did not provide further details.

The order of execution on the Filipino was a test the close relations between Indonesia and the Philippines, which are founding members of Association of South East Nations, share democratic values and have closely collaborated in helping resolve regional issues in the past.

The death penalties were condemned by the United Nations and have caused a diplomatic row between Australia and Indonesia.

But Philippine officials assured that the issue will not strain relations with its Southeast Asian neighbor, of which they say Manila shares “a lot of common interest” with.

Manila thanked the Indonesian government for its “favorable consideration” to its request to spare Veloso’s life.

Del Rosario also thanked all those who stood in solidarity with the Veloso family as he reiterated the government’s “strong commitment to pursue full investigation of those accountable for the victimization of Mary Jane.”

Unfazed by the executions, many Filipinos continue to engage in drug trafficking.

In exchange for huge payments, Filipino women and even men are reportedly being hired by West African drug syndicates to transport drugs mainly in Asia and South America – sometimes by ingesting it.

Jose said a total of 88 Filipinos are facing death penalty abroad and more than half of this figure are drug-related cases, mainly in Asia. (MNS)

Nissan Leaf to reverse into the record books