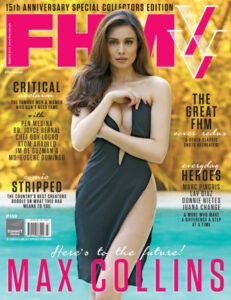 The men’s magazine unveiled on Friday its March 2015 cover, which shows Collin holding a dress that exposes her cleavage. For the shot, Colins was photographed by Doc Marlon Pecjo.

“I’m excited, because it’s a celebration of the past, but also a marker, and a start,” Collins said of her FHM debut. “I’m celebrating all the years I’ve worked as an actress – I started in showbiz when I was 14 and I’m 22 now.”

She added: “It’s been quite a while, so it’s an anniversary for me as well. I’m celebrating my years as an actress, and at the same time, with a bang, the 15th anniversary of FHM.”

A former Star Magic artist, Collins transferred to GMA-7 in 2012. The Filipino-American actress has since appeared in several drama series.(MNS)