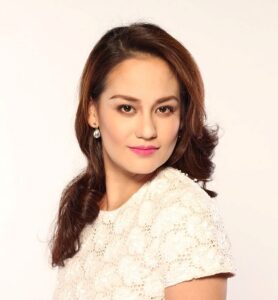 MANILA (Mabuhay) -– How does Max Eigenmann feel now that Beauty Gonzalez is expecting her first child with her ex, art curator Norman Crisologo?

Eigenmann had a past relationship with Crisologo, who is also the father of her second son.

Eigenmann said she has heard a lot of good things about Gonzalez from her son.

“My son spends weekends with them. They take trips together, sila ni Beauty. My son says very good things about her. She’s very nice. Nakilala ko na siya before. We were supposed to do Bridges of Love together. Magkasama kami sa story con. Mabait siya,” she said.

Eigenmann, however, said she only learned about Gonzalez’s pregnancy from the media.

It was just recently that Gonzalez confirmed rumors that she is pregnant.

In an Instagram post, the former “Ningning” star flaunted her growing belly in a bikini. The photo had the caption: “Would you like to ride in my beautiful balloon, we can float amongst the stars, together you and I.”

Rumors that Gonzalez is pregnant surfaced last month after she posted a photo of her “promise” ring from her non-showbiz boyfriend Crisologo.

Some netizens also noticed that the actress has gained weight.