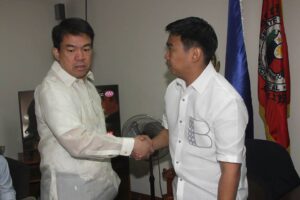 PIMENTEL TALKS WITH MAYOR BINAY: Senate Blue Ribbon Subcommittee chair Aquilino “Koko” Pimentel III talks to Makati City Mayor Junjun Binay, who is currently being detained in the Office of the Senate Sergeant-at-Arms (OSAA) at the Senate building, Pasay City on Thursday, January 29, 2015. Binay has been cited in contempt along with five other local officials after failing to heed a Senate subpoena requiring them to attend the subcommittee’s investigation on the allegedly overpriced Makati City Hall 2 parking building. (MNS photo)

However, Senator Aquilino “Koko” Pimentel III later set Binay free after the mayor insisted on not responding to allegations against him and his family.

“Since the order of arrest has been satisfied, your manifestation (not to answer questions) is noted. You lose your chance to give your side, you are free to go,” said Pimentel during the hearing.

Pimentel said Binay’s belief that the subcommittee didn’t have jurisdiction to compel him to answer questions related to the inquiry was contrary to the panel’s position, and indicated that it was time to elevate the issue “to a referee” that would decide which position was according to law

Earlier, the son of Vice President Jejomar “Jojo” Binay was arrested and brought to the chamber by the Senate sergeant-at-arms for contempt after he repeatedly refused to attend the hearings.

At the Senate, the mayor still refused to attend the session and insisted on being detained at the Office of the Sergeant-At-Arms.

At about 1: 30 p.m., Senator Antonio Trillanes IV made a motion to order the sergeant-at-arms to bring him to the session hall.

Minutes later, Senate security officers came in pulling Binay by his arms with one of the mayor’s lawyers tagging behind them.

Binay supporters in the gallery of the session hall booed, shouted, and some even cried when they saw the mayor being dragged into the room.

The subcommittee had to suspend the hearing to calm the situation.

After the break, Binay was made to sit down with the mayor looking at his arms, apparently checking for injuries.

Trillanes asked him if he was hurt and if he needed “special medical attention.”

Binay said he was all right and did not need to see a doctor. However, during a press conference later, the mayor complained that he suffered bruises.

Pimentel asked and allowed Binay to speak and respond to allegations against him and members of his family during the subcommittee’s investigation on the allegedly overpriced Makati City Hall 2 parking building.

Instead of explaining, the mayor reiterated his objection to the conduct of the hearing, which he and his family claim was just out to tarnish their reputation.

After manifesting hearing that Binay was giving up his right to respond to the charges and allegations, Pimentel set the mayor free. (MNS)