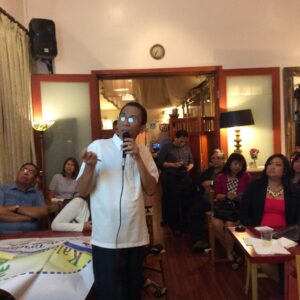 Mayor Eugenio Bito-onon of Pag-asa Municipality, Kalayaan Island Group, Palawan speaks before the members of the Fil-Am media and the community at the LA Rose Cafe against China’s bullying and island grabbing in the Spratleys. The forum in Los Angeles Wednesday was sponsored by LA US Pinoys for Good Governance led by Ms. Rocio Nuyda.

Saying we will fight fire with fire would make for a good acoustic but really implementing it against a formidable foe as China is simply a fool’s errand.

This, in a nutshell, is the opinion of Kalayaan mayor Eugenio Bito-onon who is in the US to promote the prospect of building an Eco-Tourism Zone in his municipality of six islets, two cays, two reefs and 288 residents.

The municipal government has its seat at the 32-hectare island of Pag-asa, the largest of all the islands in its jurisdiction. It has a municipal hall, a health clinic, an elementary school and a dilapidated airstrip. It is part of the province of Palawan.

Pag-asa, which means hope, may well be the country’s strongest fortress in the West Philippine Sea where islands, reefs and shoals are being disputed by Brunei, Taiwan, Malaysia, Vietnam and China.

In a presentation organized by the US Pinoys for Good Governance in a restaurant in downtown Los Angeles, Mayor Bito-onon disclosed that Pag-asa has been more besieged today than during the last three years. Pag-asa is just 13 miles away from a man-made island developed by China and it is in the process of developing another island in the area.

The mayor said Chinese warships have been frequently appearing very near the island.

Aside from that, Bito-onon also lamented the destruction of coral reefs in the West Philippine Sea as a result of the construction activities of the Chinese military and economic activities of Chinese civilian vessels. The wild life that includes birds, turtles and other marine animals have been adversely affected by the intrusions.

The magnitude of the destruction, Bito-onon claimed, has been so great that its consequences have become irreversible.

“That is why we are here tonight, to appeal to the Filipino-Americans who have the heart and deep sense of patriotism to help us,” Bito-onon said.

Inhabiting the islands, the mayor said is the best way to establish sovereignty over islands.

“Each home, each citizen, each birth or marriage on Pag-asa island helps my country stake its claim on the land,” Bito-onon told CBS News correspondent Seth Doane during an interview in July.

Bito-onon said transforming Kalayaan municipality into an economic-tourism zone could discourage China from encroaching into the area. The mayor stressed that the plan is feasible with enough support from the Philippine government and the private sector, particularly from the Filipino diaspora.

He cited the relative success of the development instituted by the MalAysian government on Layang Layang island, which is also part of the Spratly’s group of islands.

Layang layang, which is smaller than Pag-asa, has been transformed into a diving resort through the collaboration of the Malaysian government and private investors.

It also has a security contingent from the Malaysian armed forces.

“I am not against credible defense,” Bito-onon said, reiterating that we should follow the lead of other countries staking claims on islands and reefs in the region that have strengthened their military defenses on the islands that are in their respective possessions.

The Philippines has filed a case against China in The Hague, Netherlands, before Arbitral Tribunal in the Permanent Court of Arbitration.

The country is asking the tribunal to declare China’s nine-dashed line as void. The nine-dashed line is supposedly China’s historical boundary that comprised about 85% of the South China Sea. Under this claim, 80% of the Philippines’ exclusive economic zone in the West Philippine Sea would have been part of China’s territorial jurisdiction.