Mayweather-Pacquiao will be ‘great for the sport’ 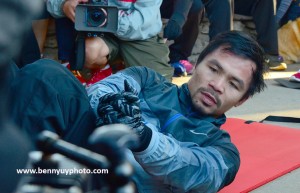 Macau, Macau |AFP|  -The May 2 superfight between Floyd Mayweather and Manny Pacquiao will be great for the sport of boxing, no matter what the outcome, Pacquiao’s trainer Freddie Roach said on Friday.

Speaking ahead of the weigh-in for his charge Zou Shiming’s world title fight against IBF flyweight champion Amnat Ruenroeng on Saturday in Macau, Roach said he expected the boxing’s popularity to surge on the back of the huge interest in the fight.

Hall of Fame trainer Roach owns the famous Wildcard gym in Los Angeles where Philippines idol and eight-division world champion Pacquiao is currently in training for the Mayweather encounter.

And Roach reckons it will be a very busy place after the two best fighters of a generation finally lock horns in Las Vegas in the richest fight of all time, expected to be worth more than $200 million.

“It’s going to generate a lot of interest in boxing,” Roach told AFP.

“I can see a lot of people are going to be coming in after that fight,” added Roach.

Not that Roach is short of work. Despite battling the debilitating effects of Parkinson’s disease, he will be in the corner for two other fighters on the Amnat-Zou undercard Saturday, junior middleweight Glen Tapia from the US and China’s junior welterweight Ik Yang.

“I still have a lot of young boxers coming through,” said Roach, despite the rising popularity of competing sports such as mixed martial arts (MMA).

“There’s a total of 22 kids on the team and six who have a chance of winning titles. And there’s also a little girl called Christy, 16 years old and (she has) won the nationals something like five times now. She might be the best fighter in the gym,” added the man who was last week voted US trainer of the year for the seventh time.

The gym won’t be throwing its doors open until after the megafight though. With ‘Pacman’ in training, Wildcard is now under security lockdown as Roach and his team try to plot their way to victory over Mayweather – in secret.