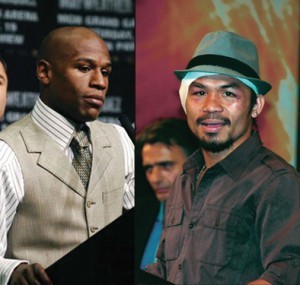 LAS VEGAS (AFP) – Floyd Mayweather still has not said who his next opponent will be, but the unbeaten US boxer has taken to social media to taunt potential foes Manny Pacquiao and Amir Khan.

Mayweather posted drawings of himself Wednesday on Twitter and Instagram delivering hard punches to Filipino icon Pacquiao and Marcos Maidana and another standing over Khan as the Englishman was falling backward to the canvas.

“Just imagine what Amir ‘Con Artist’ will get if his name gets picked in the Mayweather sweepstakes,” Mayweather posted on his Twitter account.

Mayweather, 36, also poked fun at Pacquiao, who lost to Tim Bradley and Juan Manuel Marquez before bouncing back to beat Brandon Rios last month and renew talk about a Mayweather-Pacquiao fight.

“Juan Marquez ate Timothy Bradley’s leftovers. Now you’re telling me I got to eat Juan Marquez’s leftovers? Let me talk to the IRS about this…” Mayweather posted on Twitter, adding a zinger about Philippines tax issues that nagged “Pac-Man” earlier this year.

On Monday, Mayweather posted a Twitter message showing pictures of him and Pacquiao with portable phones and captions, harkening to prior failed talks to make a Mayweather-Pacquiao fight.

“Manny, I’ll pay you 40 million to fight!” said the caption under Mayweather. “No way, you’re crazy. 50/50 or nothing” was under Pacquiao’s picture.”

Above the entire lot was Mayweather’s overall message: “This is my Christmas card to the world… Happy Sleepy Holidays zzzzzzzzzzzz”

In late 2009 and early 2010, Pacquiao and Mayweather were considered the world’s top pound-for-pound fighters and record profits were expected from a showdown between them.

But a disagreement over pre-fight blood testing scuttled talks and with Mayweather vowing never to do business with Pacquiao promoter Bob Arum, there seems little chance the fight will be made now.

That has left Khan and Maidana the top names speculated for Mayweather’s planned May 3 fight in Las Vegas. Pacquiao has a tentative April 12 bout set against an undetermined foe.

Khan pulled out of a world title fight against American Devon Alexander, fueling speculation it was because he would next fight Mayweather.

At 45-0 with 26 knockouts, Mayweather is approaching the 46-0 career mark of retired Welsh star Joe Calzaghe and the iconic 49-0 mark of heavyweight legend Rocky Marciano.

Mayweather, who beat Saul “Canelo” Alvarez last September in his most recent bout, has a contract for four more fights in the next 2 ½ years.

Something Lawsuity May Be Afoot Down Austin Way [Jurisprudence]