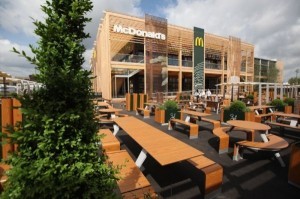 The largest McDonald's in the world is at the London Games. Â©McDonald's London

(Relaxnews) – With Olympic medalists in tow, major corporate — and controversial — sponsor McDonald’s mounted a public outreach campaign in London Thursday, announcing the launch of a new QR code system that will allow consumers to look up the nutritional info of foods with the scan their smartphones.

Amidst the chorus of critics who have opened fire at fast food and junk food brands like McDonald’s and Coca-Cola for sponsoring the Olympic Games, the company attempted to soften its image at a press conference where it announced new nutritional initiatives.

Among the biggest development is a QR code that will appear on food packaging and provide nutritional information to consumers. The system will debut at the McDonald’s Olympic venue restaurants — there are four in total — before rolling out to the majority of restaurants around the world by the end of 2013.

For the first time at the Olympic Games, children’s Happy Meals will also include a fruit, vegetable or low-fat dairy option.

Joined by Olympic medalists like swimmer Dara Torres, gymnast Shawn Johnson and soccer player Julie Foudy, the conference also highlighted McDonald’s Champions of Play program, a virtual portal where kids are encouraged to engage in physical activity. The site, developed by exercise and obesity experts, is accessible in 41 languages.

“With one in three children in Britain overweight or obese by the age of nine, we have a public health crisis that requires urgent intervention,” the letter reads. “We would ask athletes to be very conscious of the effect their endorsements may have on the future lives of youngsters.”