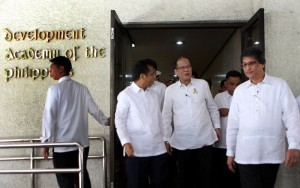 President Benigno S. Aquino III leads the 40th Founding Anniversary of the Development Academy of the Philippines (DAP) at the Assembly Hall of the DAP Building in San Miguel Avenue, Pasig City on Thursday (June 27). The President extolled DAP’s role in providing necessary skills and experience for Filipino public managers whom he considers as his partners in managing the development process of his administration. He also challenged DAP to continue refocusing its programs in creating conditions in empowering the people and the public executives. In photo are National Economic and Development Authority (NEDA) Secretary Arsenio Balisacan and DAP president Antonio Kalaw, Jr. (MNS photo)

MANILA (Mabuhay) – Inflation quickened to 1.1 percent in November from 0.4 percent the previous month due to an increase in consumer prices of both food and non-food items, the National Economic and Development Authority (NEDA) said on Friday.

“The 1.1 percent reported by the Philippine Statistics Authority today is well within the Bangko Sentral ng Pilipinas forecast of 0.4-1.2 percent for the period. It also remains lower than the 3.7 percent recorded in November 2014,” said Deputy Director-General Rolando G. Tungpalan who is also the officer-in-charge of NEDA.

“Higher local demand and the lingering effects of Typhoon Lando accounted for the price increases in meat and vegetables, while ample supply sustained the lower price of rice,” said Tungpalan.

Inflation was also observed in non-food items due to slower declines in the cost of housing, water, electricity, gas, and other fuels.

Prices of electricity, gas and other fuels went up on higher generation and transmission charges in last month. Despite the persistent downtrend in global oil prices, local prices of gasoline and liquefied petroleum gas increased while prices of diesel and kerosene remained relatively lower.

Core inflation, which excludes prices of energy and unprocessed food, increased to 1.8 percent in November from 1.5 percent in October.

For the 11 months of 2015, the average core inflation remained stable at 2.0 percent, the same as in October.

The price movements in November brought the year-to-date headline inflation to 1.4 percent – below the target range of 2.0 to 4.0 percent set by monetary authorities for 2015.

“Despite the uptick in November, average inflation will likely settle below the low-end target for the year. This will largely be influenced by the slump in global petroleum prices, along with other favorable supply-side factors such as the sluggish domestic retail prices of corn, oil and rice,” Tungpalan said.

To manage the risks of higher inflation, the NEDA official called for the faster implementation of the Roadmap for Addressing the Impact of El Niño (RAIN) to soften its adverse impact on food prices and utility rates.

“The government should err on the high side in determining food import requirements in anticipation of El Niño to avoid food price spikes, which would be very detrimental to the poor who spends over 60 percent of their budget on food,” he said.

Tungpalan noted the unstable energy situation in Mindanao, given its large dependence on hydropower plants. “There is a need to reinforce measures to expand investments in the rehabilitation program for existing hydropower plants so as to increase their generation capacities,” he said.

“The government should also start preparing for the possible impact of La Niña, which could be a strong one as well. The current drier than normal conditions must be taken advantage of to build flood mitigation infrastructures,” he added.(MNS)