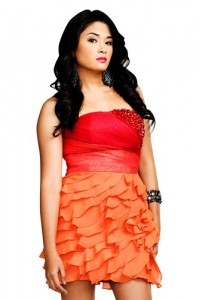 MANILA (Mabuhay) -– At one point dubbed by her talent agency as its “Anjanette Abayari look-alike,” Viva’s up-and-coming sexy star is gearing up to be the local entertainment outfit’s “next Cristine Reyes.”

First discovered for her appearance in a music video, Yam Concepcion is being groomed by the talent management arm of Viva Entertainment to headline its upcoming sexy films.

But according to “Viva’s newest sweetheart,” as she is dubbed by men’s magazine FHM, shedding her clothes for the big screen isn’t all that’s planned for her showbiz career.

Her career peg? That of Kapamilya actress Cristine Reyes.

“[Viva management] told me that they wanted me to be sexy in the mold of Cristine Reyes, doing teleseryes, being the leading woman, things like that,” Conception told FHM in its October 2012 issue, where she appears as its cover girl.

Also a talent of Viva, Reyes, after her stint in a reality talent search, has gone on to become a dramatic actress both in TV and films. The younger sister of actress Ara Mina, the Kapamilya star is also regarded as among the country’s “sexiest,” as suggested by her staple appearance in FHM’s yearly poll.

Despite being tagged as a “sex symbol,” Reyes would outgrow her claim to fame with dramatic performances in TV series such as “Dahil sa Pag-Ibig,” and in films like “No Other Woman.”

For her part, Concepcion aims for the same kind of growth, which meant taking the “risk” of making her debut via FHM and an upcoming sexy film.

“I’m just trying to be strong and versatile. I’m risking it all, that’s how life is — you have to risk it and go out of your comfort zone, try different things and learn from it,” she said.

For her film debut, Concepcion said she will star in the “scandalous” adult-drama film “Rigodon,” directed by Erik Matti.

“It has three characters and shows three different points of view on how they regard love, life, lust, marriage and such,” she said of the film. “I gave it my all. Let’s leave it at that. [It’s] very scandalous.”

Although she is being launched as an adult film star, Concepcion said she doesn’t consider herself a “sex symbol” just yet. She added, however, that she has at least come to terms with having a Cristine Reyes-inspired showbiz career as her occupation for the foreseeable future.

“I wouldn’t consider myself a sexy symbol. It actually took a year [of talks]. I had to psyche myself for it; I didn’t want to do something I wasn’t a hundred percent sure [I wanted to do],” Concepcion said. (MNS)

Dingdong Dantes still no to politics