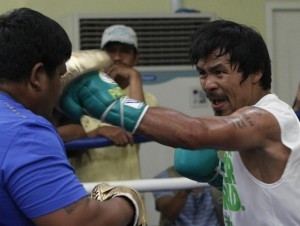 Philippine boxing icon Manny Pacquiao began training Wednesday for his June world title defence against US challenger Timothy Bradley, saying he has God in his corner. Pacquiao is regarded as one of the best 10 southpaws in boxing history.

â€œMay pag-asa pa [Thereâ€™s still a chance], depending on the negotiations,â€ the Filipino ring idol told this reporter in his condominium unit in Los Angeles, where he watched the last two rounds of the Mayweather-Cotto fight on Saturday night (Sunday in Manila).

â€œIt was a good fight. They both fought well,â€ Pacquiao added in Filipino.

Mayweather used his speed and accuracy to win a unanimous decision over a game Cotto in one of his toughest fights ever.

Mayweather dominated late, rocking Cotto in the 12th round to pull out a win and remain unbeaten in 43 fights. But it wasnâ€™t easy, with Mayweather getting his nose bloodied and Cotto fighting until the final bell.

Mayweather was guaranteed $32 million for the fight. After the decision was announced, Mayweather discussed a possible fight with Pacquiao, his rival for the title of the worldâ€™s best pound-for-pound fighter.

Fans have been clamoring for the megafight, which has hit various stumbling blocks, including Mayweatherâ€™s insistence that Pacquiao agree to blood testing and how the revenue from the fight is to be divided.

â€œI tried to make the Pacquiao fight and that didnâ€™t work, so I fought Miguel Cotto instead and gave the fans a great fight,â€ Mayweather said. â€œI want to fight Pacquiao but he has to take the test, and Iâ€™ll fight him.â€

Pacquiaoâ€™s promoter Bob Arum has said Pacquiao is willing to take blood and urine tests in the weeks and months leading up to a fight with Mayweather.

Pacquiao stopped Cotto by a 12th-round technical knockout when they fought in 2009, also in Las Vegas. The Filipino knocked down Cotto twice â€“ a feat Mayweather failed to achieve against the Puerto Rican.

Pacquiao arrived with his entourage at Los Angeles International Airport just as the fight started in Las Vegas. He went straight to his Los Angeles condominium, where he caught the tail end of the fight. Family members and friends, who watched the fight with him, all rooted for Cotto.

The Filipino is scheduled to face American Timothy Bradley on June 9 at MGM Grand Hotel and Casino in Las Vegas, where the Mayweather-Cotto bout was held.Â  Pacquiao will start training here on Monday.

When HBO announcer Larry Merchant began his post-match interview with Mayweather, Pacquiao reached for the remote control and turned up the volume. As Pacquiao expected, Mayweather talked about him.

When Mayweather told Merchant that Pacquiao should take the drug test before he would fight him, the crowd gathered in Pacquiaoâ€™s home jeered.

So It Begins: NFL Security Sends Us An E-Mail About Brett Favre And Jenn Sterger [Brett Favre]