Megan looks back at showbiz 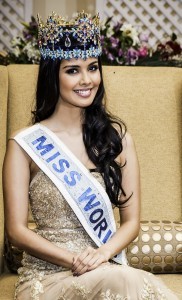 Turned-beauty queen Megan Young may be traipsing all over the world fulfilling her Miss World duties  but she does admit she misses local showbiz. She even related that she’s considering returning to it one day.

Megan admitted she has been offered various TV and film projects but has chosen to focus on her responsibilities as Miss World.

In fact, even her love life has been put on the backseat. “I am not entertaining stuff like that for the meantime,” she declared.

Megan is in the country for now to fulfill other Miss World duties. Among her recent appearances was a speaking engagement at the Philippines General Hospital (PGH) for the ground-breaking ceremony of the new Hematology-Oncology Isolation Ward in the department of Pediatrics, which is sponsored by Beauty With A Purpose, a charity organization associated with Miss World.

Though Megan’s reign is drawing to a close – she will turn over her crown to a successor in December – she believes that she has enough time to complete her remaining duties. (MNS)

Darren Espanto wants to be an international artist

‘Calungsod’ at MMFF: JM out, Rocco in