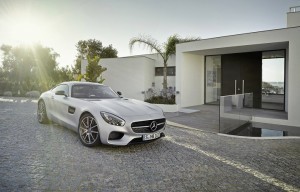 The Mercedes-AMG GT: The new car wants to challenge the Porsche 911 Turbo. ©Mercedes-Benz

(Relaxnews) – Compact, agile, eco-friendly yet powerful and practical to boot, the Mercedes-AMG GT has its sights set on wowing not just the Porsche 911 faithful but potential Lamborghini, Aston Martin and even McLaren clients.

Unveiled to the world’s motoring press at a special event on Tuesday night, the Mercedes-AMG GT is a replacement for the company’s outgoing SLS AMG, a car that was all about conspicuous performance.

And although the Mercedes-AMG GT and its predecessor clearly share some DNA – some of its proportions are exaggerated on purpose, for example – it has been built with a focus on lifestyle rather than just good or striking looks and on offering a serious alternative to a host of similarly attractive serious drivers’ cars.

“The new Mercedes-AMG GT is a sports car in its purest form,” says Gorden Wagener, Vice President Design Daimler AG. “Breathtaking proportions, powerfully sculpted surfaces and flowing lines turn the new AMG into a contemporary sports car which embodies the spirit of the glorious Mercedes sports cars. The GT is a consummate combination of beauty and intelligence.”

But will beauty and intelligence be enough for the car to break into a market dominated by the Porsche 911 Turbo, which offers blistering performance, bulletproof build quality and sufficient levels of comfort, practicality and exclusivity to work as an almost everyday car?

And it should be a joy to drive at any speed whether in a straight line or negotiating a hairpin turn, thanks to almost 50/50 weight distribution, a new suspension set-up which includes clever dampers that can step in to stop the car’s body rolling, and an electronic differential. Mercedes claims that the new tech should also make the car predictable and even well behaved when on the limit.

In terms of practicality, it has a proper hatchback trunk so there’s 350 liters of space for luggage, and it comes with a host of cutting-edge driver aid technologies including semi-autonomous systems—such as parking assist, collision avoidance and automatic emergency braking. These are features that make the car easy to drive in normal—rather than track—conditions.

And then, of course, there’s the cabin: the styling is heavily influenced by aviation and the space offers levels of comfort and an infotainment system that frankly none of its competitors can match.

“With the new Mercedes-AMG GT, we are venturing out into a challenging sports car segment with its top-class competitive field. This is an incentive and motivation for us at the same time to prove to sports car enthusiasts around the world the kind of performance that AMG is capable of,” says Prof Dr Thomas Weber, Member of the Board of Management of Daimler AG, responsible for Group Research & Mercedes-Benz Cars Development.

If the Mercedes-AMG GT can deliver on the road what it promises on paper, then it is a car that is going to give Porsche a serious headache. However, Mercedes isn’t the only company looking to challenge the 911 or the 911 Turbo. McLaren is getting ready to reveal the P13 and Aston Martin is busy developing a new two-seat super coupé, while the second-generation Audi R8 could launch before the end of 2014 too. All of which means that in 2015, supercar customers with €140,000 ($175,000) to spend, are going to be spoiled for choice.

Landing a job: It’s about location and education