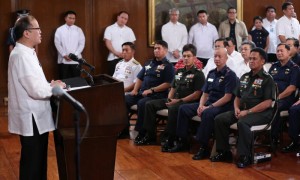 MANILA (Mabuhay) – Metro Manila is now a safer place to live in than in previous years. That is because of the dedication of policemen to “do their job to the ultimate,” Interior Secretary Manuel “Mar” Roxas II said Monday.

(Overall, it is safer now in National Capitol Region compared to the previous years and this is a result of your diligence, dedication, your professionalism, and your service.)

Although there are still improvements that need to be done in some police stations in the region, Roxas said he is proud of the National Capital Region Police Office.

“They are doing their job to the ultimate. We honor them every day by likewise doing our work professionally, competently, responsibly, to serve and to prootect. The order is very simple. The mandate is simple: to serve and to protect,” he added.

The NCRPO’s success, according to Roxas, could be attributed to the “Oplan Lambat-Sibat,” the crime prevention strategy Roxas and the PNP leadership initiated.

Under the leadership of NCRPO head Police Director Carmelo Valmoria, Roxas said that from the average number of 1,000 crime incidents per week, it has been reduced to less than 500 since the Lambat-Sibat’s implementation.

He also noted that out of 440 most wanted criminals in Metro Manila, 140 have been captured.

Since the Mamasapano debacle, Roxas said that in every achievement of the police force, the PNP has mixed feelings of happiness and sadness.

The lives of 44 policemen were claimed after a covert operation in Mamasapano, Maguindanao province to arrest a Malaysian terrorist. This, however, led to a 12-hour deadly encounter with Moro rebels.

“To men and women of the Philippine National Police and in particular the NCRPO, I salute you, I honor you, and I am proud to be with you. Thank you very much. Thank you for the good job that you are doing to our people. Good morning to all.” (MNS)