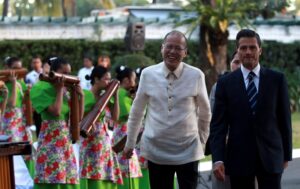 President Benigno S. Aquino III and His Excellency Enrique Peña Nieto, President of the United Mexican States, enjoy the cultural presentation during the welcome ceremony for the State Visit to the Philippines of Mexican head of state on Tuesday (November 17) at the sidelines of the APEC Economic Leaders’ Meeting in Manila. (MNS photo)

In his message Tuesday during a toast to President Aquino, Nieto said the two countries, under Spanish rule, was tied by the Acapulco Galleon trade 450 years ago.

The Manila Galleon set sail from the Philippines to the port of Acapulco, in Mexico carrying goods from Asia to the Americas, he said.

“This historic commercial route linked our nations and approached our peoples. More than four centuries later, it remains a symbol of shared identity,” Nieto said in his message.

In the 20th century, the deep relationship of friendship between the two nations was once again confirmed when Mexico sent the Expeditionary Mexican Air Force, during World War II, reinforcing Filipino troops.

Today, more than seven decades after that war, the Philippines and Mexico are united in their commitment to positive transformation, aimed at elevating the quality of life of their societies, he said.

Nieto also recognized the great contribution of the Aquino family to the Philippine democracy noting the struggles of President Aquino’s parents as well as the chief executive himself.

The Aquino family fought for liberties and rights of the Filipino people that although not easy, it has borne positive results.

“President Aquino, you lead a government that projects to the world an irrevocable commitment to the modernization of the Philippines and the well-being of its people,” Nieto told the President.

“I wish to express that you can count on Mexico and the Mexican people support towards that goal.”

Mexico recognizes that Asia-Pacific is an essential region in the 21st century and the Philippines is Mexico’s great ally.

“With this State Visit, we honor our past; we celebrate our current similarities and we are committed to a better future for Filipinos and Mexicans.”

President Aquino hosted a state dinner at the Malacanang Palace Tuesday evening in honor of the visiting Mexican leader. (MNS)

More than one million households will be left without electricity by 2017, group says