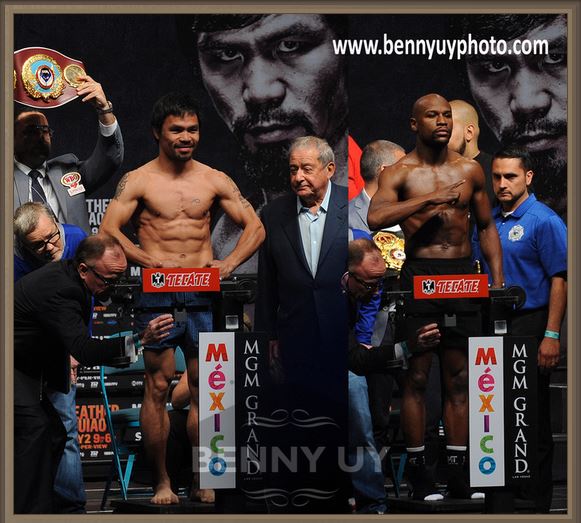 Manny Pacquiao weighs in at 145 lbs while Floyd Mayweather at 146. The two will face each other Saturday at MGM Grand Garden Arena in Las Vegas. Photo: Benny Uy

MGM Grand Garden Arena was filled to capacity of 12,000 boxing fans or more or less coming from all over America, the Philippines and all over the world to witness the official weigh-in of the two boxing titans, American boxing icon, Floyd “Money” Mayweather, Jr. and Filipino boxing idol Manny “Pacman” Pacquaio. Added to the attendance was almost a thousand members of the media corps who filled up the ring floor and a part of the concourse section.

Fans dole out $10.00 each to witness and see in person the two greatest boxers of this decade who will be fighting for the unified welterweight
championships of the world and be part of one of the greatest sporting spectacles that will happen the next day, May 2nd. First in the history of boxing that any boxing event will charge the fans to see the boxers weigh-in for the fight. This has a two-sided purpose. First is for crowd control and the second is to benefit the two charities of choice by Mayweather and by Pacquiao. Half of the proceeds will go to the Susan G. Komen for the Cure foundation, a breast cancer charity Mayweather has supported through the years. The other half of the proceeds will go to the Cleveland Clinic Lou Ruvo Center for Brain Health, Pacquiao’s choice.

The crowd in attendance exchanged boos and cheers when the host, Doug E. Fresh, asked the fans whom they are going to pick as the winner. A young boy of around 12 years old has chosen Mayweather to win in spite of the host showing him Pacquiao’s boxing highlights. That earned him funny boos from Pacquiao fans.

American rapper Doug E. Fresh along with DJ Jay Bling and a TMT mascot were so busy hosting and keeping the fans entertained while waiting for the official weigh-in from past 12 until the arrival of the main protagonists at around 3:15 pm. The duo of Rey Sremmurd performed and Flow Rapper with their four dancers also performed.

Pacquiao and his team entered first before the Mayweather team both to the crowd’s standing ovations with fans’ cell phones and cameras coming out like mushrooms as they headed to the stage and during the weigh-in.

Michael Buffet of HBO and Jimmy Lennon, Jr. of Showtime, two of the greatest ring announcers of the modern era were on hand exchanging introduction of their boxers from the two undercards until the main event.

Pacquiao was having fun showing the crowd the food he was eating after the weigh-in and the back of his T-shirt with a print “All Glory And Honor Belongs To God.”

Mayweather said when interviewed, “”I’ve dedicated myself to the sport of boxing for over 20 years, and I’m ready.”
Pacquiao said he is not bothered by the bigger size of Mayweather. “I have been fighting bigger guys like Margarito and others. Does not matter to me,” Pacquiao said matter of fact.