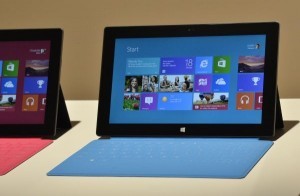 (SAN FRANCISCO-AFP) – Microsoft said Monday it is launching more than 30 pop-up holiday shops in the United States and Canada as it gears up to sell its new Surface tablet computer.

“Microsoft is excited to expand on its existing retail footprint to deliver an assortment of best-in-class products and a premium retail experience to new locations,” the US tech giant said in a statement.

“The holiday stores continue to offer customers the opportunity to learn new technology skills and get the most out of their Microsoft-enabled devices. Additional locations and details will be available in the coming weeks.”

The company released a list of 32 locations for the shops — known as pop-ups because they have short or seasonal commercial leases — including in New York, San Francisco, Vancouver and Toronto.

The US tech giant on Monday had job listings seeking retail store managers and other personnel. The company offered no specifics on how long these shops would be operational or what they would sell.

The company, which has been in the process of opening permanent retail stores in several US cities, is seeking to break into the competitive market for tablet computers with Surface, set to be released October 26.

Microsoft has said the device would be sold online and through its own retail stores in the US market.

Surface, which will compete against the market-leading iPad and others, features a flip-out rear “kickstand” to prop it up like a picture frame and a cover that, when opened, acts as a keypad so tablets could be switched into “desktop” mode for work tasks.

Aquino sees 2015 as chance to showcase PHL on world stage