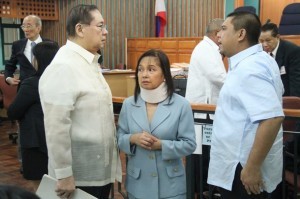 MANILA (Mabuhay) – Former First Gentleman Mike Arroyo has sought the permission of the Sandiganbayan to allow him to travel abroad even as he faces graft charges over the Philippine National Police (PNP) chopper mess.

In his petition before the anti-graft court’s fifth division, Arroyo sought the court’s permission to travel to Japan from October 25 to 30, as well as in Hong Kong from October 30 to November 2.

Arroyo said he will be staying in Hotel Tokyo Chyoda-ku in Japan and Marco Gateway Hotel along Tsim Sha Tsui in the former British Colony.

Arroyo’s camp said the former First Gentleman is not a flight risk because his wife, former President Gloria Arroyo, is under hospital detention in the country over the Philippine Charity Sweepstakes Office (PCSO) intelligence funds mess.

“This Honorable court as well as other courts have graciously permitted him to travel before, and he has always returned here as it is here where his family and business interests are. His wife is likewise here, hence, he has no reason not to return. He is, thus, clearly not a flight risk,” Arroyo’s motion read.

Mr. Arroyo said he will return on November 2.

The fifth division in August allowed Arroyo to travel to Europe with his family.

The former first gentleman was accused of selling two second-hand choppers to the police and passing it off as brand new. (MNS)