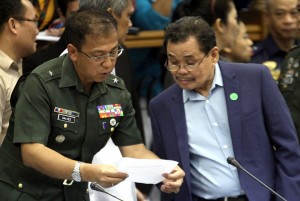 In a letter to the chairpersons of two House committees holding the hearing, Iqbal requested that he be allowed to attend the hearing once the Moro group’s internal investigation on the Mamasapano clash has wrapped up.

“Rest assured that we will convey to the committees immediately our availability once we have the results of the investigation,” he added.

“There has never been any doubt on our minds that these rightfully belong to the Philippine government,” he said.

On Tuesday, Iqbal also requested that his appearance before the Senate committees conducting the probe be done in executive session.

It was also in his letter to the Senate that Iqbal inidicated the MILF’s willingness to return the firearms of the slain PNP-SAF personnel.