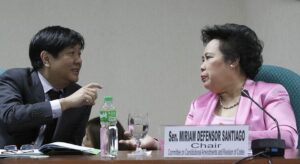 Jaafar said: “I don’t think it will affect discussions of the BBL, I don’t think this should delay the process.”

He added that “technically, there is still war in Mindanao, because what we have only here now is a ceasefire agreement.”

“Hindi ko nga alam kung sino ang unang nagpaputok, but what I can categorically pronounce now is that there was no coordination made and I think this is a violation to the provision of the ceasefire agreement,” he said.

Sources said the police operation was to serve an arrest warrant on Malaysian bombmaker Zulkifli Bin Hir, also known as “Marwan,” whose presence had been confirmed in the area. The US Federal Bureau of Investigation has offered a $5-million reward for information on “Marwan.”

He also said he did not know if there were casualties on the rebel groups’ side.

Senior Superintendent Noel Armilla, director of the Philippine National Police (PNP) in the Autonomous Region in Muslim Mindanao (ARMM), earlier said the number of police officers killed has gone up to 50, a report on GMA News Tv’s News to Go said Monday.

Meanwhile, Senator Ferdinand “Bongbong” Marcos Jr, chair of the Senate committee on local government, suspended “indefinitely” the discussions and hearings related to the passage of the BBL.

“We cannot, in conscience, proceed with these hearings while a cloud of serious doubt hangs over the security situation in the south. A peace agreement cannot be legislated under the threat of such extreme violence. Violence has no room in a civilized society,” he added.

However, the hearing to be conducted by the Senate committee on constitutional amendments, headed by Senator Miriam Defensor Santiago, will push through as scheduled on Monday morning, according to the lady senator’s office.

The hearing is set to tackle the constitutional issues surrounding the proposed BBL. (MNS)