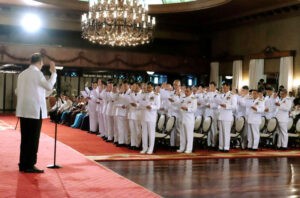 President Benigno S. Aquino III administers the oath of office to newly-appointed generals and flag officers of the Armed Forces of the Philippines during the oath-taking of military officers at the Rizal Hall of the Malacañan Palace on Wednesday (May 27). (MNS photo)

MANILA  (Mabuhay) — The Armed Forces of the Philippines announced that its Civil Disturbance Management (CDM) Company is now preparing for the upcoming Asia-Pacific Economic Cooperation (APEC) Economic Leaders’ Meeting in Manila this November.

The training is to ensure better response in situations requiring CDM service.

The AFP CDM Company will be on standby for the duration of the APEC Meeting as support unit to Philippine National Police personnel who will be on the frontline of keeping the safety and security of the event.

They will be immediately deployed if necessary or when when the peaceful conduct of the event is threatened.

The CDM Company is composed of soldiers under the Security and Escort Group of AFP General Headquarters based in Camp General Emilio Aguinaldo.

They will also be accompanied by AFP K-9 units.

These soldiers were also properly briefed in human rights as part of their training, Detoyato stressed. (MNS)

Cancellation of Removal for Out of Status Individuals