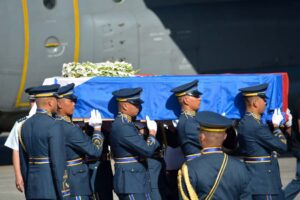 Philippine Air Force honor guards carry the casket bearing the remains of Philippine ambassador to Pakistan Domingo Lucenario Jr. upon arrival at the Villamor Air Base on Wednesday. Lucenario died in a helicopter crash in northern Pakistan along with 6 other people. (MNS photo)

MANILA, May 13 (Mabuhay) — Military honors were accorded to the late Philippine Ambassador to Pakistan Domingo Lucenario Jr. on Wednesday upon the arrival of his remains at the Villamor Air Base in Pasay City.

The plane bearing his remains arrived at half past seven in the morning on board a C-130 plane of the Pakistani Air Force.

Four pairs of pallbearers with ranks of lieutenant colonel carried the ambassador’s coffin covered with the Philippine flag from the aircraft to the runway where the military honors were given.

The diplomat’s widow, Atty. Nida Arada Lucenario, and their son Domingo III also arrived this morning from Pakistan on board the same plane. They were joined by the couple’s daughters Atty. Marian Catherine Lucenerio and Maria Dominique “Nikki” Lucenerio in the arrival ceremony and turnover of the remains.

Lucenario was on board a helicopter on May 8 on the way to visit development projects in northern Pakistan when the chopper crashed.

Aside from Lucenario, Norway’s ambassador Leif Larsen also died, along with the wives of the Malaysian and Indonesian envoys.

‘He loved the foreign service’

According to Marian and Nikki, the family is saddened and they miss their father every day.

“On behalf of our family, we would like to say thank you to all the people who have shared their condolences with us and who have expressed their support to our family especially during this very tragic time for us,” Marian said.

The family is still in grief as they lost their grandmother from their mother’s side this February.

The Lucenario sisters said their father would have wanted them to be strong at this time.

To cope, Marian and Nikki, a third year economics student, relived their most joyful memories with their father.

“We did a lot of karaoke. My dad really loved to sing and I got that from him. At every family event or any other event with friends, Dad would really love to express himself through song,” Nikki recounted.

The siblings also admired their father’s passion for his job.

“He loved the foreign service. And that reflected on how good he did his job.” Nikki said.

Justice Secretary Leila de Lima, a family friend of the Lucenarios, was also at the arrival ceremony on Wednesday.

De Lima attested to how professional and efficient Ambassador Lucenario was in his job that he even left a legacy in Pakistan.

“Meron palang pinuput up na bagong embassy or building ‘yung post. We had that property, piece of land, but nagkaroon ng groundbreaking last year. And that of course is through the efforts of Ambassador Doy,” De Lima said.

Officials from the Department of Foreign Affairs including Undersecretary Linglingay Lacanlale, Undersecretary Jesus Yabes and spokesperson Assistant Secretary Charles Jose also attended the ceremony and offered their condolences to the family.

According to Jose, Lucenario’s body will be brought to Arlington Memorial Chapels in Quezon City for funeral arrangements afterwhich the remains will be taken to The Heritage Park in Taguig City for the wake.

On Friday morning, the DFA will hold a memorial service in its office in Pasay City.

The ambassador’s remains will be laid to rest on Sunday morning at Holy Cross Memorial Park in Quezon City. (MNS)