Military peacekeepers given a clean bill of health 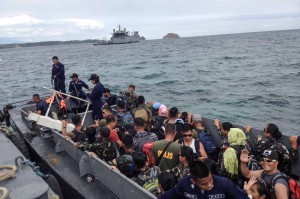 — Filipino peacekeepers from Liberia leave Caballo Island on Tuesday after undergoing a 21-day quarantine. The soldiers, who had to be quarantined before being cleared of the dreaded Ebola virus, will undergo 2 more days of tests before reuniting with their families. (MNS photo)

MANILA (Mabuhay) – The 107 military members of the 18th Philippine Contingent to Liberia were all given a clean bill of health following a routine medical screening at the Armed Forces of the Philippines Medical Center.

Cabunoc said that the peacekeepers arrived at the AFP Medical Center around 9 p.m. on Tuesday.

Earlier, the Philippine Navy announced that the peacekeepers, who were transported by the BRP Dagupan (LC-551) from Caballo Island, arrived at Naval Station Heracleo Alano, Sangley Point, Cavite around 7:30 p.m. Tuesday.

The vessel and its passengers left Caballo Island around 3 p.m., of the same day.

During their arrival, they were greeted by Joint Task Group Liberia commander Capt.Luz Camacho.

After greetings, the Caballo Island returnees where all transported by military buses to the AFP Medical Center.

All 107 peacekeepers were found to be clear of any disease or ailments, Cabunoc said.

He said that the medical screening is standard procedure for all returning Filipino peacekeepers.

After their medical screening, the 107 military personnel were immediately taken to the AFP Peacekeeping Operation Center barracks where they are now resting.

Earlier, the 24 Philippine National Police members and one Bureau of Jail Management and Penology operative, were taken custody by their parent units.

Cabunoc added that the peacekeeper, who suffered chest pains, while in quarantine at Caballo Island, will not be able to attend the welcoming and awarding ceremonies as he is scheduled for an angiogram.

AFP chief-of-staff Gen. Gregorio Pio P. Catapang Jr. will lead the welcome ceremony that will be held on 4:30 p.m. Thursday.

“I am very happy that the peacekeepers have successfully finished the quarantine without any untoward incident. I am commending them for their self-sacrifices to make our country Ebola virus-free,” he said.

The AFP chief will award the UN Service Medal to the peacekeepers for their splendid performance and invaluable services as members of the peacekeeping contingent in Liberia.

The peacekeepers, members of the 18th Philippine Contingent to Liberia, were transported to Caballo Island on Nov. 13, a day after arriving at Villamor Air Base in Pasay City from Monrovia.(MNS)