Millions across PH visit their dead 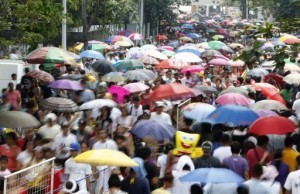 Filipinos flock to a public cemetery to remember their departed loved ones on All Saints Day in Manila November 1, 2012. (MNS photo)

MANILA, Nov 1 (Mabuhay) — Millions across the Philippines visited cemeteries Thursday to pay respects to their dead, in an annual tradition that combines Catholic religious rites with the country’s penchant for festivity.

Manila North Cemetery, one of Metro Manila’s largest cemeteries, has already drawn 1.1 million people as of 2 p.m. The high volume of visitors prompted the cemetery administration to open additional gates.

Security was tight in the 54-hectare cemetery, with at least 200 policemen roving and inspecting the visitors’ belongings for any prohibited items such as alcohol, lethal weapons, playing cards, and metal objects, including belt buckles.

So far, 42 people have been apprehended in Manila North Cemetery. Twenty-two were caught in a drinking session inside the cemetery while five were arrested for allegedly using illegal drugs.

The smaller Manila South Cemetery in Makati reported around 500,000 thousand visitors this morning. At least 300,000 more are expected later today.

The cemetery provides visitors aid in finding the tomb of their departed loved ones. Information for those who died from 1994 until the present can already be found in a computer database.

Philipine National Police chief Nicanor Bartolome, who was at the at the Manila South Cemetery as of this story’s posting, said no any untoward incident has been recorded in the area so far.

Bartolome also touted the “airport-like” inspection in Metro Manila’s cemeteries, saying this is helpful in preventing crimes. He also defended the ridiculed policy of not allowing even belt buckles and metal utensils inside the cemeteries.

Bartolome assured the public that the confiscated items can still be claimed upon leaving the cemetery premises.

Despite calls from various groups and even members of the clergy, several politicians still used the season to campaign for the elections.

Tarpaulins and tents bearing politicians’ photos and names were set up near cemeteries. The politicians’ volunteers were offering water supply and food, while some set up first aid stations and information centers.

They offered flowers and candles, and prayed at the tomb of the Aquino couple.

At least a million are expected in the Manila Memorial Park today.

Security was also tight at the cemetery, with at least a hundred police on patrol.

Fans are also expected to visit the tombs of famous personalities such as Fernando Poe, Jr., AJ Perez and Rico Yan who are also buried at the Manila Memorial Park.

The “Undas” season is also not without Filipinos grabbing the chance to earn money by selling various items, from food to Halloween costumes.

“Beware of food sold in and around cemeteries as these pose risk of food poisoning,” Tayag said in his Twitter account.

Lifestyle diseases on the rise among Filipinos