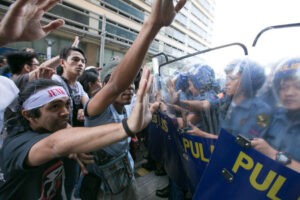 Activists from the League of Filipino Students try to break through the police barricade during a protest action across the US Embassy in Manila on Tuesday. The group slammed the economic policies under the Asia Pacific Economic Cooperation, which allegedly perpetuates the commercialization of education in the country.(MNS photo)

MANILA, Nov 18 (Mabuhay) — The military on Wednesday said the beheading of a Malaysian hostage by the Abu Sayyaf in Sulu and the bombing in Davao City have nothing to do with the country’s hosting of the Asia-Pacific Economic Cooperation (APEC) leaders’ summit.

He was referring to the beheading of Bernard Ghen Ted Fen in Indanan, Sulu, on Tuesday, after his family failed to pay the ransom demand of the Abu Sayyaf terrorist group.

In a joint statement read by Padilla, the military and the police described the killing of the Malaysian hostage as “inhuman, barbaric and brutal.”

“The Armed Forces of the Philippines and the Philippine National Police headquarters have indeed received news of the inhuman, barbaric and brutal incident in the island of Jolo and the bombing in the city of Davao,” he said.

One person was hurt when a bomb explosion hit a passenger van in Davao City on Wednesday morning.

“We have commanders on the ground who are now attending to all of these and we will await for their full report,” Padilla said.

Padilla also denied that there was a news blackout regarding these incidents, which happened on the day most of the economic leaders arrived in the Philippines for the APEC meeting.

Padilla assured the public that government security forces are fully capable of addressing any similar incidents that may occur in Metro Manila.

“The APEC Security Task Force is fully focused in fulfilling its mandate and regard to our hosting,” he said. (MNS)