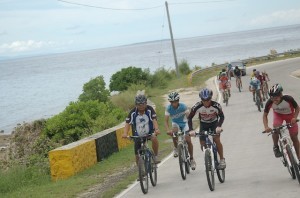 The Peace Advocate Zamboanga (PAZ) in a statement Wednesday said that the activity, which will start Sunday, August 21, until next week also aims to strengthen solidarity among the peace stakeholders.

PAZ is a Catholic organization whose objective is the promotion of peace by strengthening good relations among Muslims and Christians, and all other peoples.

PAZ said the bike marathon will be preceded by a Culture of Peace briefing and Citizensâ€™ Peace Forum to be held on Saturday, August 20, at the Western Mindanao State University (WMSU) here.

The theme of the forum is â€œDuyog Mindanao: Generating Citizensâ€™ Participation in the Peace Process.â€

The bikers will stop at significant points and institutions located along the highway routes to hold dialogues with local citizens on topics related to the peace process.

The bike run will kick off at 6 a.m., Sunday, August 11, from the WMSU open stage, make a symbolic pass at the PAZâ€™s peace monument in Barangay Sta. Maria and move on to Curuan, 50 kilometers east of this city, where the participants will spend the night.

On Monday, they will drive up to Ipil, the capital town of the nearby Zamboanga Sibugay province and from there to the rest of the itinerary will be followed.

PAZ said that those who are interested to joint the Run for Peace and Solidarity in Mindanao may contact its office at telephone numbers (062) 992-3086 or 0916-870-82-90 and look for Aldrin Abdurahim, the Executive Coordinator of IRSMP. â–