Mini looks to core range of 5 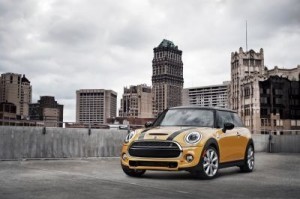 The 2014 Mini
Mini is trimming back its range from eight to five models.
©Mini

(Relaxnews) – BMW has announced that it’s to cut the Mini range down to size in order to focus on five key ‘Superhero’ models. And to give customers even greater levels of care and service.

Speaking at an event at BMW’s headquarters in Munich, the Mini brand’s chief, Peter Schwarzenbauer said that the decision was to ensure each new Mini really stands with its own personality and capabilities “Like a superhero.”

When BMW resurrected the Mini in 2001 it did so with a single model available in three levels of trim and performance. However, over the past 13 years the range has slowly swollen and there are currently eight different Minis available plus limited edition models.

But rather than diluting the brand, the expansion has worked — Mini is enjoying record sales — and has led to some imitation, most notably from Fiat with its equally retro-styled 500 being stretched into a range including a five-door model, a people carrier and most recently, a crossover miniature SUV.

Although Schwarzenbauer wouldn’t be drawn on specifics, the cars most likely to get the chop will be the Paceman, the Coupé and the Roadster.

Slimming down the range will also give Mini the space to add new levels of customer care and individual service. Bringing a premium touch to the mass market car buying experience is a growing trend.

Citroën has recently spun out its DS range as a separate premium brand with a focus on client relationship and Ford is about to launch its Vignale sub-brand in Europe. Buyers of Vignale models will be greeted in specially designed luxurious showrooms where they will get an individual relationship manager who will take care of every detail from selecting exterior paint schemes to personal touches in the cabin.

Schwarzenbauer said that Mini intends to open up access to its cars and its dealers on a 24-hours-a-day, seven-days-a-week basis and to put a greater focus on transparency, informing its clients on how cars are made, how the materials are sourced and sustainability — subjects the company believes its core customers care passionately about.

From Bataan Death March to the Academy Awards