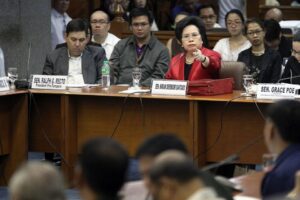 At the continuation of the Senate investigation on the Mamasapano incident, Santiago said a video showing the brutal killing of one of the SAF troopers by still unidentified men can be used as evidence in the filing of charges.

In the said video, which was first posted on YouTube, it can be seen that one of the Special Action Force (SAF) commandos was still alive when he was shot twice on the head by a still unidentified man, believed to be a Moro guerilla.

She stressed that based on the United Nation’s Geneva Conventions of War, when the enemy is no longer able to fight back, he should be taken as prisoner of war by the opposing side.

“The [SAF] men literally walked into the trap, they have nowhere to go, because their escape routes were fully covered by the enemies. Wala na silang bala, wala silang cover, kaya we call this a massacre not an encounter,” Santiago said.

Santiago then grilled relieved SAF chief Director Getulio Napeñas Jr. for the alleged lack of coordination with the military, but the latter reverted to his earlier statement during the previous hearings that the coordination with the Army’s 6th Infantry Division occurred “time on target” or when the SAF troopers were already deployed in the target area, as it was what was agreed upon during the planning of the ill-fated operation.

The operation was launched to arrest Malaysian terrorist Zulkifli bin Hir alias Marwan and Filipino bomb maker Basit Usman. Marwan, blamed for the 2002 Bali bombing, was killed in the operation but Usman was able to escape. (MNS)