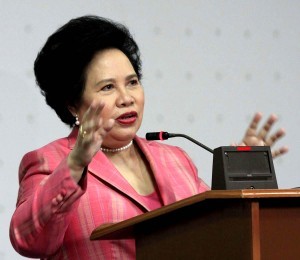 “I think we mutually chose each other, our two camps,” Santiago said during the senator’s induction into the Philippine Judges Association Hall of Fame at Marriott Hotel on Thursday.

Santiago said their “telephone lines happened to cross each other… It was coincidental. One camp was calling the other.”

Marcos, of the Nacionalista Party, had filed his certificate of candidacy for vice president on Tuesday at the Commission on Elections head office in Intramuros, Manila.

On the other hand, Santiago has yet to file her COC. 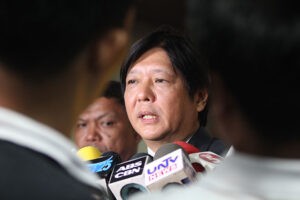 During the event in Pasay, Santiago revealed she would be filing her COC at the Comelec on Friday.

Asked about her health and medical history, Santiago, who defeated Stage Four lung cancer, said she was willing to answer any question about it and that she would be telling the people the complete truth.

Santiago will run under her People’s Reform Party, the same party she founded and ran under when she sought the presidency in 1992 and 1998.

In her speech, Santiago took a swipe at some of her colleagues, saying that at the Senate everybody is “dreaming… dreaming to become president.” Santiago said people at the Senate are all “komiko” or comics.

Also attending the PHILJA event was Justice Secretary Leila de Lima, who delivered a keynote address and is expected to file her own COC at the Comelec later in the day. (MNS)