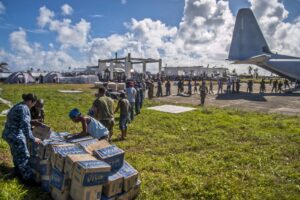 MANILA (Mabuhay) – Senator Miriam Defensor Santiago said Friday the Department of Social Welfare and Development must be made to explain why it failed to implement its relief and poverty alleviation programs despite the availability of funds.

Santiago is set to file Monday a resolution urging the Senate to investigate the hundreds of millions of pesos worth of donations the DSWD failed to deploy for victims of the 2013 super typhoon Yolanda.

She cited a Commission on Audit (COA) report that almost half a billion pesos donated for typhoon victims were either kept in bank accounts or used to buy relief goods that were never distributed.

“The purpose of donations is defeated if funds sit idly in government bank accounts. The DSWD is not only denying disaster victims of much-needed assistance, they are also misusing money from donors and taxpayers,” the senator said in a press statement.

The COA stated that P382.072 million in local and foreign donations for Yolanda victims remained in DSWD bank accounts by the end of 2014. The agency also had P141.084 million worth of undistributed and expired or near-expiry food packs.

The senator agreed with COA that the DSWD was remiss in accepting the donations without increasing its absorptive capacity, particularly its warehousing facilities, personnel, available stocks, shelf life, and needs of the victims.

Santiago said the DSWD should be probed for failing to hit its target of providing emergency shelter assistance to 468,732 homeless beneficiaries. The COA claimed that the agency only provided shelter to 142,348, spending P3 billion in the process.

She also questioned gaps in the implementation of the Pantawid Pamilyang Pilipino Program (4Ps), highlighting COA findings that some P312 million in 4Ps cash grants were unclaimed from the Land Bank of the Philippines.

“Clearly, there is something wrong about the government’s flagship anti-poverty program. They must explain the multiple entries on the list of 4Ps beneficiaries and the frequent delays in coordination and grant payments,” she said.

She also hit delays in the DSWD’s supplementary feeding program because of poor coordination with partner agencies.

About half of the 55,496 of the 116,637 beneficiaries of the Social Pension for Indigent Senior Citizens program also failed to claim their pensions.

“The government must take social welfare seriously. Those running the DSWD now seemed to think they can afford to slack. Not only must social welfare programs be well thought out, they must also effectively be implemented,” Santiago said.

“I welcome the Senate probe. It is an opportunity to explain our programs and the positive changes done in the lives of our partner beneficiaries,” she said. (MNS)

Fire up the grill with U.S. farm-raised catfish

DepEd reminds schools of no collection policy for Christmas party