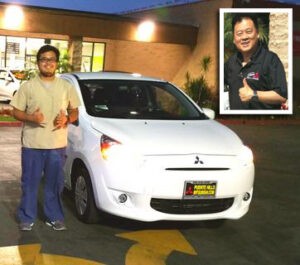 Lance Elarmo shows off his brand-new 2015 Mitsubishi Mirage he purchased at Puente Hills Mitsubishi who was ably aided by our friendly kababayan Filipino Sales & Leasing professional Alex Jacinto (inset) at the dealership.

Mitsubishi Motors North America, Inc. (MMNA) achieved its 16th consecutive month of year-over-year sales increases in June, reporting 7,963 units sold – an increase of 32.3 percent from June 2014. Sales for the first half of the year are up 24.9% over a strong performance in 2014.

“The first half of last year was pretty incredible for Mitsubishi Motors,” said Don Swearingen, executive vice president of MMNA. “And this year our January through June sales are even stronger, up 24.9% for the year. We expect this pace to continue as the new 2016 Outlander starts to roll into dealerships.”

The Mitsubishi Outlander Sport compact crossover reached an all-time monthly high with May sales of 3,384 units, an increase of 20.0 percent from May 2014. The highly fuel-efficient Mitsubishi Mirage 5-door sub-compact also completed a historic month with sales of 3,369 units, an increase of 98.2% over May 2014. The seven-passenger Outlander crossover demonstrated continued consistent sales performance with 1,341 units sold – its best May sales since 2008.

“Mirage, Outlander Sport, and Outlander  continue to lead the charge for the brand and, frankly, that comes as no surprise,” explains Don Swearingen, executive vice president of MMNA. “Each model brings to its segment the Mitsubishi value proposition and clearly that message is resonating with consumers. Later this summer we will be introducing the featured-loaded new 2016 Outlander and it will be priced to further add to our value story.”

Earlier, the 2015 Mitsubishi Outlander Sport crossover has been named by Kelley Blue Book’s KBB.com as one of its “10 Most Affordable SUVs.” Known for a long list of features at an affordable price point, the Outlander Sport also received this same recognition in 2014.

If you’re interested to know why the SUV and the Mitsubishi has captured the fancy of millions Americans through the years, all you have to do is get in touch with out kababayans – Filipino Sales & Leasing professionals Alex Jacinto and Norm Bustillos and Finance Manager Norm Bustamante at Puente Hills Mitsubishi. You can reach them at 1-866-400-1067.