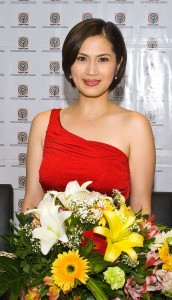 MANILA (Mabuhay) -– Sexy actress Diana Zubiri will be walking down the aisle again, the latest addition to the growing list of celebrity weddings in the past months.

In her Instagram account on Saturday, Zubiri posted a picture of what seemed to be an engagement ring.

The photo was accompanied by the lyrics of the ‘N Sync song “This I Promise You,” which the actress posted in the caption.

For his part, Zubiri’s boyfriend, Andrew Smith, posted a video of his proposal to the actress on his Instagram account earlier.

Zubiri first got married in 2008 but she unfortunately lost her husband two years later.

The actress returned to the Kapamilya network in 2012 and was last seen on the soap “Bukas Na Lang Kita Mamahalin.” Smith, on the other hand, was the 2007 Mossimo Bikini Summit winner. (MNS)