Mom testifies for US Marine charged with murder 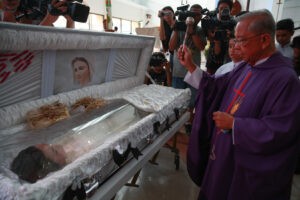 A priest douses holy water on the remains of Jennifer Laude. The suspect in her death, as US Marine, has been charged with murder. (MNS photo)

OLONGAPO, Philippines | AFP |  – A US Marine charged with murdering a transgender woman in the Philippines put his mother on the witness stand to start his defense Monday, lawyers said.

Lisa Pemberton testified to the “good character” of her son Joseph Scott Pemberton at the closed-door trial in the northern port of Olongapo, his lawyer Rowena Flores told AFP.

He is detained at a Manila military camp, accused of murdering Jennifer Laude whose remains were found in an Olongapo motel room in October 2014 shortly after the two left a local bar together.

Pemberton had been taking part in joint US-Philippine military exercises nearby.

The case has attracted national attention as the Philippines seeks closer defense ties with the United States in the face of Chinese territorial claims in the South China Sea.

The mother, said by court officials to be a 44-year-old nurse, was the first defense witness after Filipino prosecutors had presented their case.

Flores would not say if or when Pemberton himself would take the stand.

They came mostly from family friends, she added.

“I have never known him to exhibit any signs of hostility or violence. To the contrary, he has a reputation of ‘never hurting a fly’,” the mother’s best friend Diane Rioux was quoted as saying.

“Joseph has always been a non-judgmental person who is accepting of others’ differences whether it is cultural, race, sexual orientation or other,” she added.

Harry Roque, a lawyer for the victim’s family, said the mother also testified that her son did not discriminate against gay people.

The judicial proceedings are expected to be completed this year.

COVID vaccine in exchange for Pemberton? DOH says no such condition set by US manufacturers