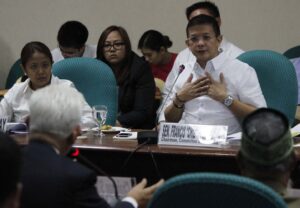 MANILA  (Mabuhay) — Senator Nancy Binay believes it was Malacañang that gave the instruction to the Bureau of Customs (BOC) to implement the random inspection of balikbayan boxes.

In a statement, Binay said Customs chief Alberto Lina may just be following the directive from his superiors.

The senator recalled how Presidential Spokesperson Edwin Lacierda supposedly said that the government “does not gain anything” from the remittances of OFWs.

“There is obviously a nefarious gnome trying to instigate the OFWs to be in conflict with this government,” he said.

Communications Secretary Herminio Coloma Jr. belied Binay’s claim, pointing out that the BOC’s proposed policy on balikbayan boxes was meant to fight illegal smuggling, and not to adversely affect OFWs.

Meanwhile, Senator Binay has joined other lawmakers in pushing for a legislative inquiry on the BOC’s new policy.

On Monday, President Benigno Aquino III ordered the BOC to stop the physical inspections of balikbayan boxes unless X-ray and K-9 examinations give rise to suspicions that they contain prohibited items.

If Customs deems that a physical inspection is necessary, Aquino said it should request that an Overseas Workers Welfare Administration representative or a designated officer of an OFW Association be present with provisions for CCTV monitoring of the inspection areas. (MNS)

Jinggoy suspects robbery in his house was an ‘inside job’