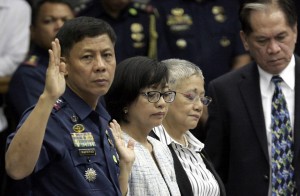 Atty. Vitaliano Aguirre said the chain of responsibility in a civilian organization like the PNP is different from that of the military.

“Kaya when he told, when Gen. Purisima told Gen. Napeñas, ‘huwag mo munang sabihan ‘yung dalawa,’ referring to Gen. Espina and Sec. Roxas, ‘ako ang bahala kay Gen. Catapang.’ He took it to mean, palagay ko he is justified in saying, or in thinking, that it was the order of the president,” he added.

According to Aguirre, Napeñas had no choice but to follow Purisima’s orders, since he was ‘inserted’ into the plan by President Aquino.

Since Napeñas was told that Purisima will coordinate with the military, he did as he was told and did not inform either Espina or Interior Secretary Mar Roxas.

The President on Monday lashed out at Napena for pushing through with the January 25 operation despite allegedly deviating from the original plan and disobeying his order to coordinate the mission with the Philippine military.

Aquino added that he was “given the wrong information by the people who knew most what was happening,” leading to the deaths of 44 SAF commandos.

The PNP Board of Inquiry report on the Mamasapano incident, meanwhile, said Aquino, Purisima and Napenas violated the chain of command when they “kept information” on the anti-terror operation in Mamasapano on January 25 “to themselves.” (MNS)