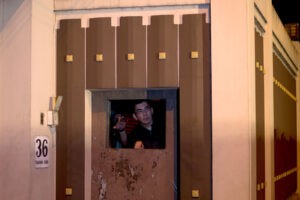 Felix Nathaniel “Angel” Manalo, younger brother of Iglesia Ni Cristo leader Eduardo Manalo, speaks to reporters from the gate of his house in Manila on July 24, two days after he and his mother alleged in a YouTube post that their lives were in danger and that some of the group’s ministers were being held against their will. The influential Christian group, which votes as a bloc, expelled the two relatives on July 22 and denied abducting the ministers.(MNS photo)

MANILA (Mabuhay) – The National Bureau of Investigation (NBI) on Monday said it has already “closed” its investigation on the alleged abduction of ministers of Iglesia ni Cristo.

Manuel Eduarte, chief of the NBI Anti-Organized Transnational Crime Division, said the bureau decided to end its probe on the abduction claims after coordinating with the religious organization’s central office in Quezon City and after visiting an INC compound in Tandang Sora, where Felix Nathaniel “Angel” Manalo was holed up.

Manalo, an estranged brother of Eduardo – the current executive minister of Iglesia Ni Cristo, and their mother Christina “Tenny” Manalo were earlier expelled from the religious group after exposing alleged threats to their lives and abduction of INC ministers.

“Per report of my men… [they] reported to us that they were not able to prove the allegation of abduction,” said Eduarte, adding that NBI agents were unable to enter the premises of the Manalo compound in Tandang Sora.

“They tried knocking [on] the gate, which was locked. They were not given entry. So no information was gathered and they were told there’s no such thing such as an abduction inside the premises of the INC,” the NBI official said.

Eduarte said his men also coordinated with the legal office of the INC head office along Commonwealth Avenue in Quezon City. He said the INC central office denied the existence of any abduction.

“Considering that they (NBI agents) felt somewhere, there was a squabble within, they did not bother to look into allegations regarding anomalies at said religious group. So for us, it is considered closed already,” said Eduarte.

He, however, clarified that he was still “in the process of awaiting further information from the grounds.”

The blog site “Iglesia Ni Cristo – Silent No More,” run by a certain Antonio Ramirez Ebangelista, earlier claimed that nine of the organization’s ministers in different provinces were abducted and expelled from the group.

Three of them were identified as Boyet Menorca of Sorsogon, Joven Sepillo of Tacloban, and Nolan Olarte of Cebu.

Menorca, who turned out to be arrested and detained at the the Dasmariñas City Police Station, has been released from jail.

Police said the criminal complaint against him has been dropped.

On Thursday, people inside the Manalo house in Tandang Sora in Quezon City flashed messages that read: “Where are the missing ministers?”

INC General Evangelist Bienvenido Santiago had said in a press briefing earlier Thursday that the accusations against them were not true.

Quezon City policemen on Thursday night trooped to an Iglesia ni Cristo compound in Tandang Sora to check reports of abduction or illegal detention. They were, however, barred from entering the house, although they later on declared that there was no abduction in the compound. (MNS)

Legislator: Marcos, Duterte-Carpio will not benefit from term-extension bill