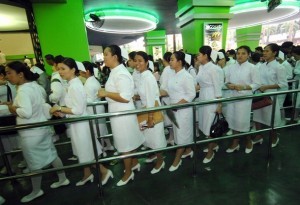 MANILA (Mabuhay) — A total of 1,951 Philippine-educated nurses took the US National Licensure Examination (NCLEX) for the first time from January to June this year, in the hopes of obtaining gainful employment in America, Cebu Rep. Gerald Anthony Gullas Jr. said Monday.

“The number is little changed when compared to the 1,944 Filipino nurses who took the NCLEX for the first time, excluding repeaters, over the same six-month period in 2013,” said Gullas, vice chairman of the House committee on higher and technical education.

“We do not expect the number of Filipino nurses seeking to practice their profession in America to increase any time soon. The healthcare labor market there remains somewhat bleak,” the House Assistant Majority Leader said.

“We remain positive that the situation will eventually improve as the US economy starts to recover. But right now, a number of US hospitals and nursing homes are still laying off workers,” he added.

According to Gullas, based on the latest report from the US Bureau of Labor Statistics, in July alone, US hospitals shed off 7,000 jobs, while nursing care facilities there got rid of another 6,000.

He urged Filipino nurses to instead seek potential employment in the Middle East and other countries that continue to recruit foreign healthcare staff.

The 2007-2008 global financial crisis sent the US economy into deep economic slowdown that forced many hospitals and nursing homes, especially those wholly or partly funded by federal and state agencies, to cut back staff and cease hiring new nurses.

The number of Filipino nurses taking the NCLEX for the first time is considered a reliable indicator as to how many of them are trying to enter the profession in America.

In 2013, a total of 4,034 Filipinos took the NCLEX for the first time, representing less than one-fifth of the record-high 21,499 that took the same examination at the height of the 2007 nursing boom.

The Philippines continues to produce thousands of new nurses every year, despite a large surplus. (MNS)

Army says no remorse in release of ‘Morong 43’