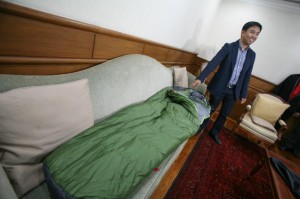 Makati Mayor Jejomar Erwin “Junjun” Binay shows the sofa in his office at the 21st floor of the Makati City Hall on Thursday where he said he spent the previous night. Binay reiterated he will not step down until the court decides on his petition against the suspension order of the Ombudsman. (MNS photo)

MANILA (Mabuhay) – Former Senator Aquilino “Nene” Pimentel Jr. said Junjun Binay should stay as mayor of Makati City, amid a claim that the temporary restraining order (TRO) issued on his suspension was already moot and academic.

Pimentel, a former Interior secretary and considered the father of the Local Government Code, said the TRO issued by the Court of Appeals on the 6-month preventive suspension of Binay by the Office of the Ombudsman must be enforced.

Peña was sworn in as Makati’s acting mayor on Monday, about an hour after the suspension order on Binay was posted on the wall of the Makati City Hall.

A TRO was later released by the Court of Appeals on the suspension order, but it was contested by the Department of the Interior and Local Government, Department of Justice, and the Office of the Ombudsman.

The two departments and the anti-graft body insist that there was nothing to restrain as the suspension order was already served and Peña was already sworn in as acting mayor.

The DILG argued that the court should have issued a status quo ante order (SQAO) instead of a TRO because the suspension order was already served.

The camp of Binay has already filed contempt charges against DILG Secretary Mar Roxas and Peña for supposedly ignoring the CA resolution.

With the suspension issue not yet resolved due to the clashing legal opinions, Binay remains holed up in his office at the 21st floor of the new Makati City Hall.

The Office of the Ombudsman’s 6-month preventive suspension order on Binay stems from the allegations of overpricing of the Makati City Hall Building II. (MNS)