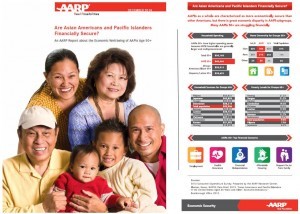 WASHINGTON, D.C.  – A new research report from AARP reveals economic disparity among Asian Americans and Pacific Islanders (AAPIs) age 50+. When viewed as a whole, AAPIs appear more financially secure than the general population, but the aggregate totals and median averages mask a large wealth and income gap among AAPIs. While a few AAPI groups have higher levels of household income and consumer spending, many more Asian ethnic groups are at or below poverty levels compared to the general population of the same age.

“We are committed to bringing attention to the needs of AAPI 50+ so that gaps in knowledge about and services for these communities are met,” said Daphne Kwok, AARP Vice President of Multicultural Markets and Engagement for the Asian American and Pacific Islander Audience. “AAPIs are consistently understudied and underserved. Our research demonstrates that the priority needs of AAPIs differ by ethnic group, age, language, income, the length of time they’ve lived in the U.S., and other factors.”

AARP’s report about the economic security of older AAPIs reveals that:

“Are Asian Americans and Pacific Islanders Financially Secure?: An AARP Report about the Economic Well-being of AAPIs age 50+” is the second of a three-part series of reports by AARP about key advocacy areas that impact AAPIs age 50 and older. The report is available for free download at www.AARP.org/AAPI. The next report about the health and healthcare of AAPIs will be released in January.

For more information about how AARP helps Asian American & Pacific Islander families get more out of life, visit www.facebook.com/AARPAAPICommunity andwww.twitter.com/AARPAAPI.

About AARP
AARP is a nonprofit, nonpartisan organization, with a membership of nearly 38 million, that helps people turn their goals and dreams into real possibilities, strengthens communities and fights for the issues that matter most to families such as healthcare, employment and income security, retirement planning, affordable utilities and protection from financial abuse. We advocate for individuals in the marketplace by selecting products and services of high quality and value to carry the AARP name as well as help our members obtain discounts on a wide range of products, travel, and services.  A trusted source for lifestyle tips, news and educational information, AARP produces AARP The Magazine, the world’s largest circulation magazine; AARP Bulletin; www.aarp.org; AARP TV & Radio; AARP Books; and AARP en Español, a Spanish-language website addressing the interests and needs of Hispanics. AARP does not endorse candidates for public office or make contributions to political campaigns or candidates.  The AARP Foundation is an affiliated charity that provides security, protection, and empowerment to older persons in need with support from thousands of volunteers, donors, and sponsors. AARP has staffed offices in all 50 states, the District of Columbia, Puerto Rico, and the U.S. Virgin Islands. Learn more atwww.aarp.org.