Sports Illustrated is reporting new information about embattled, seven-time Tour de France winner Lance Armstrong, who is the focus of a federal grand jury inquiry in Los Angeles. The investigation is headed by Jeff Novitzky of the U.S. Food and Drug Administration, who previously investigated Barry Bonds and Marion Jones.

Agents have been looking into whether Armstrong was involved in an organized doping operation as a member of the team sponsored by the U.S. Postal Service from 1999 to 2004, and since August the grand jury has been hearing testimony from Armstrong’s associates and confidants. In light of those proceedings, SI writers Selena Roberts and David Epstein reviewed hundreds of pages of documents and interviewed dozens of sources in Europe, New Zealand and the U.S. for a story in the Jan. 24 issue of the magazine, which will be available on newsstands Wednesday. 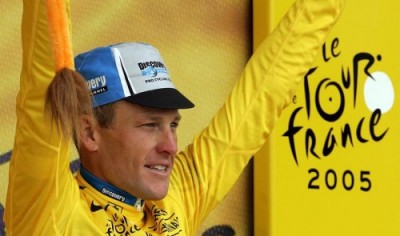 According to the story, “If a court finds that Armstrong won his titles while taking performance-enhancing drugs, his entourage may come to be known as the domestiques of the saddest deception in sports history.”

â€¢ In the late 1990s, according to a source with knowledge of the government’s investigation of Armstrong, the Texan gained access to a drug, in clinical trial, called HemAssist, developed by Baxter Healthcare Corp. HemAssist was to be used for cases of extreme blood loss. In animal studies, it had been shown to boost the blood’s oxygen-carrying capacity, without as many risks as EPO. (Armstrong, through his lawyer, denies ever taking HemAssist.)

â€¢ One of the perks of traveling with Armstrong, former USPS rider Floyd Landis recalls, was frequent trips on private airline charters. Private airports often subject travelers to less stringent customs checks. But Landis tells SI about the day in 2003 that he, Armstrong and team members flew into St. Moritz, where customs officials requested that they open their duffel bags for a search. “Lance had a bag of drugs and s—,” says Landis.

“They wanted to search it, which was out of the ordinary.” Sifting through Armstrong’s bag, agents found syringes and drugs with labels written in Spanish. As Landis recounts, Armstrong then asked a member of his contingent to convince the agents that the drugs were vitamins and that the syringes were for vitamin injections. The agents “looked at us sideways,” says Landis, “but let us through.” (Armstrong denies that this incident ever occurred.)

Armstrong won that year’s Tour de France by a scant 61 seconds over his archrival, Jan Ullrich of Germany. It was by far the narrowest of his seven Tour victories.

â€¢ When Italian police and customs officials raided the home of longtime Armstrong teammate Yarolslav Popovych last November, they discovered documents and PEDs as well as texts and e-mails linking Armstrong’s team to controversial Italian physician Michele Ferrari as recently as 2009, though Armstrong had said he cut ties with Ferrari in 2004.

â€¢ In a letter reviewed by SI, Armstrong’s testosterone-epitestosterone ratio was reported to be higher than normal on three occasions between 1993 and 1996, but in each case the test was dismissed by the UCLA lab of renowned anti-doping expert Don Catlin, whose lab tested the Texan some two dozen times between 1990 and 2000. In addition to detailing those test results, SI reveals what appears to have been a reluctance from USOC officials to sanction athletes using performance-enhancing drugs.

In 1999, USA Cycling sent a formal request to Catlin for past test results – specifically, testosterone-epitestosterone ratios – for a cyclist identified only by his drug-testing code numbers. A source with knowledge of the request says that the cyclist was Armstrong. In a letter responding to those requests, Catlin informed USA Cycling that his lab could not recover five of the cyclist’s test results. Of the results that could be found, “three stand out,” SI reports: “a 9.0-to-1 ratio from a sample collected on June 23, 1993; a 7.6-to-1 from July 7, 1994; and a 6.5-to-1 from June 4, 1996. Most people have a ratio of 1-to-1. Prior to 2005, any ratio above 6.0-to-1 was considered abnormally high and evidence of doping; in 2005 that ratio was lowered to 4.0-to-1.”

While he didn’t address the 6.5-to-1 result, Catlin wrote that he had attempted confirmation (a required step) on the 9.0-to-1 and 7.6-to-1 samples, and “in both cases the confirmation was unsuccessful and the samples were reported negative.” (Armstrong says he has never taken performance-enhancing drugs and has never been informed that he tested positive.)

â€¢ Stephen Swart, a New Zealander who rode with Armstrong on the Motorola squad in 1995, describes the Texan as the driving force behind some of the team members deciding to use the banned blood booster EPO. “He was the instigator,” Swart tells SI. “It was his words that pushed us toward doing it.”

Swart, who admits to using EPO himself, also describes a hotel-room ritual in which riders pricked their fingers, put the blood in a vial, then ran it through a toaster-sized machine that provided their hematocrit levels.

Before 2001, when cycling began using a test for EPO, riders with a hematocrit level higher than 50 were subject to a 15-day ban. Swart recalls a rest-day during the ’95 Tour when the Motorola riders tested their hematocrit levels. Swart was at 48. “Lance was 54 or 56,” Swart recalls.

The next day, their teammate Fabio Casartelli was killed as the result of a crash while descending Col de Portet d’Aspet, in the Pyrenees. Three days later, Armstrong attacked a group of breakaway riders, soloing to victory in Stage 18, pointing to the heavens as he crossed the line, in honor of his fallen teammate. “I rode with the strength of two men today,” he proclaimed. (Armstrong denies ever using performance-enhancing drugs.)

Donaire on a title fight with Montiel Feb. 19 in Las Vegas